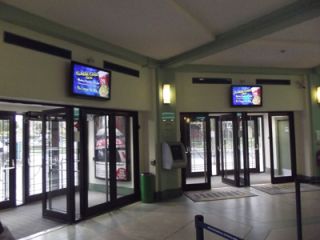 Digital information displays in Letchworth Broadway Cinema powered by digitalsignage.NET and managed by Review SystemsThe cinema uses three displays located in its lobby to advertise ticket prices, upcoming movies and opening times intermixed with third- party advertisements of local businesses, scheduled and played in digitalsignage.NET. The content is created by Review Systems, who also manages its delivery to the screens. The company has been using Dynamax’s application since the beginning of 2012 to control its nation-wide advertising network that includes, besides cinema theaters, garden centers and car dealerships across the UK.

“After using digitalsignage.NET for the last 12 months we have found it to be the right content management solution for us,” said Jonathan Brown, Managing Director at Review Systems. “The ability to schedule and play High Definition content was a must for our applications and it delivers on all levels.”

digitalsignage.NET is also used to power a digital signage display in the 80-year-old, 7-screen Playhouse Cinema in Perth, Scotland.

Jonathan Brown added, ’’I think cinemas have a particular advantage when it comes to advertising. They attract a large number of people on a regular basis that many other local businesses want to reach (think solicitors, colleges, restaurants, etc.) So selling advertising space on their screens isn’t just a natural decision for them but also a much easier move to make.’’ And in this case, it’s all for a good cause.

The Letchworth Garden City Heritage Foundation, Broadway Cinema’s owner, reinvests all the money generated through advertising and through the sale of cinema tickets back into the Garden City's community and landscape.