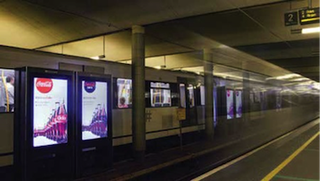 Digital advertising content in the Oslo metro system is delivered to 176 digital screens in three stations by Matrox AV over IP devices. The distributed digital signage is no longer affected by metro-run system tests that would abruptly shut off the power.

The phrase “AV over IP” is thrown around a lot. Put simply, AV over IP is about sending uncompressed audio and video information over standard IP mediums. Put a little bit more complexly, it can also mean encoding the sources and streaming the content with some compression to mitigate bitrate over IP mediums. Ultimately, it means providing extension and switching of video and audio sources over standard IP

That means inputs and outputs anywhere and everywhere, in a formerly confined signal path world. “Sources can be ‘any’ and ‘many,’ including desktop PC outputs, video cameras, media players, satellite/cable boxes, etc.,” explained Samuel Recine, director of sales for the Americas and Asia Pacific at Matrox Graphics. “And destinations can be ‘any’ and ‘many,’ including receiver boxes connected directly to televisions in huddle rooms or public spaces, video wall controllers in control rooms, laptops or PCs decoding and displaying the source streams, or even purely software-based decoding and displaying on handheld devices like smartphones or tablets.”

“The beauty of IP is there are many ways to achieve the goal.” That’s how Paul Harris, CEO of Aurora Multimedia put it. The application will determine the allowable image quality, bandwidth, and latency. “For low bandwidth, H.264 answers the call, but with a penalty of latency and image quality due to high levels of compression. If more bandwidth is available, there are low-latency, visually lossless compressions like JPEG 2000, TICO, and a few others to deliver higher quality images at a lower latency. When bandwidth is not an issue and having no latency with no compression is important (broadcast, videoconferencing, etc.), this can now be achieved on a 10G network topology.”

Compression adds another layer to the definition. “Understanding which compression technologies are used and their relative tradeoffs is critical to a successful design,” said Rob Carter, technology manager for DigitalMedia at Crestron. A rule of thumb for the two most popular options in the AV space: H.264 optimizes for bandwidth while JPEG 2000 optimizes for latency (i.e., processing delay time).

Cat-X doesn’t mean IP. Look out for technologies that use Cat-X cables to transmit AV information, but via proprietary hardware and/or proprietary switching (like HDBaseT, for example). These have limits where real-deal AV over IP “is effectively limitless in its ability to be multicast and sent over LAN, WAN, internet, wireless, and so forth,” emphasized Matrox’s Recine.

AV over IP packs light, so it travels faster and further. If you’re not hung up on compression, and you’re willing to trade in the unbridled bandwidth of a dedicated signal, then please enjoy the freedom offered by the “virtual signal paths” provided by AV over IP solutions, which remove distance limitations and allow full HD video capabilities with minimal latency.

If you’re talking about audio, check your definitions. “There is an important difference between Audio over IP (AoIP) and Audio over Ethernet (AoE), and people all too often use synonymously,” explained Amanda Roe, global public relations and research manager at Biamp. AoIP is a technology category for moving compressed audio over the internet, most commonly used by broadcasters and services like Spotify and Pandora. Higher latency brought on by dedicated codecs requiring multiple hops makes it impractical for AV needs. Meanwhile, AoE is a technology category for moving uncompressed audio across an ethernet network. Latency here is not an issue, as AoE generally resides within a LAN.

With so many variations, what questions should be asked before selecting AV over IP technology? “Before selecting products, it’s best to understand the scale, scope, and expected performance levels from the end user,” asserted Joe da Silva, director of product marketing for Extron.

Then you can get into the nitty gritty. Erik Indresovde, director of AV products at Black Box listed several considerations for product selection: Does it come with a system for remote management? Does it require networking specialists for installation or is there an easy way to set it up? Is it a solution meant to be used on a local area network or to send video over the internet? What is the latency? Is the solution 4K compatible? What type of audio, video, and peripheral signals are supported (e.g., HDMI, analog audio, RS-232, USB)? Does the system have video wall support?

Now, you can consider yourself prepared for the future. “The internet is not the hula-hoop of today—it’s not going away, and it isn’t shrinking,” observed Mark Armon, product manager for tvONE. “The idea of ‘going to a specific conference room’ has been called to question. The writing is on the wall, get on the network or get out of the IT rack. In 10 years, the ‘smartphone generation’ will expect a level of connectivity, that is difficult to imagine in today’s world, but it is inevitable.”

—Kirsten Nelson is editor-at-large of SCN.