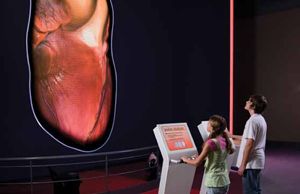 It’s no longer your grandmother’s dusty old museum. Advances in projector technology, fueled by the visions of exhibit designers, have illuminated a market that is interactive, stimulating, and creative.

The Museum of Science and Industry, Chicago is using seven projectiondesign highresolution DLP projectors and four 7thSense Delta media servers for its new Giant Heart within the YOU! The Experience exhibit. Conceived and designed by Thinc Design with AV systems integration carried out by BBI Engineering, the Giant Heart uses a steel “XURF” projection surface for two projectiondesign F12 and three F22 projectors. These units project a single, seamless moving image, with content coming from one of four different pre-programmed movies.

Having the proper tools to project the creative visions of museum and exhibit designers is a source of pride, said Chuck Collins, VP, commercial AV at Digital Projection. “We create the precision projectors that bring artistic visions in museums, planetariums, and similar venues around the world to life. This creative realization inspires us to develop even more innovative projectors. Many people don’t realize that the museum market is one of the more difficult ones to address because of the long operation hours; if a projector is down, the presentation has an obvious gaping hole visually.”

The most exciting innovations, he says, come from the ability to display in portrait mode, with the projector on its side. “As eye-catching as it is unconventional, projectors capable of running in both traditional and portrait modes provide unlimited display options. Thanks to precision displays like Digital Projection’s Titan, museum artists can utilize the height as well as the width of a venue.

Prime examples, he says, are the rotunda installation for the Jimmy Carter Presidential Library and Museum in Atlanta, GA, and The Grammy Museum in Los Angeles, CA. Recently completed DP projects include the installation of two DP projectors in the AV upgrade of the Kentucky Derby Museum in Louisville, KY, and both Titan and Lightning high-lumen, high-efficiency projectors in the Pro Football Hall Of Fame’s Game Day Stadium Theaters.

Another development is edgeblending and warping, projecting on a curved screen with a new aspectwide (but not high) image. Thirdly, Collins said, is the emergence of LED illumination in venues with controlled ambient light and a low lifetime cost of ownership with a lifespan doubling and tripling what was previously available with UHP projectors.

“What an installation such as the Carter does for me, as head of commercial sales, is to be able to point to an example where the client has had many cumulative hours of troublefree service,” Collins noted. “This really is a test track for a projector to hold up to these incredibly demanding hours.”

Technology has matured, said Tom Hennes, founder, Thinc Design, a New York, NY-based exhibition design firm that conceived and designed the Giant Heart exhibit at the Museum of Science and Industry in Chicago, IL. “We’re finding that we can use multiple projectors for a seamless panorama in many exhibit areas, working in reasonably illuminated spaces.”

The seamless multi-projector display has come down both in technical difficulty and cost, he said, so there is no longer a barrier to putting information or some kind of moving interpretation on any surface.

“One major trend, to be emphasized in our work at the National 9/11 Memorial Museum (opening in 2012), is that we’re finding we can use imagery and text as well as ambient audio as a kind of overlay for objects and the archeological environment,” Hennes said. “We will project images where we want to bring the past into juxtaposition with artifacts.”

A former theatrical designer, Hennes played for years with projection as illusion. “I understand the impact of floating images and objects in space,” he said.

The Giant Heart exhibit combines a layer of front-projection with rearprojection. “The goal is to fool the eye into not seeing where the surfaces are,” Hennes said. “We soft-sculpted the heart, and installed seven projectors with images, front and rear, in unison so it feels like a real pulsating heart. As surfaces become interactive and increasingly intuitive, using camera vision or other subtle means of movement, people respond intuitively.”

The next hurdle, Hennes speculated, is the black factor. “It’s a limitation and solving it is huge for me as well as improving lens design to be more flexible. What really matters is the ability to get the shot and to have enough contrast to make it work. You can do wild stuff on three-dimensional surfaces. It should be as easy as using a paint brush; you still need the painter but the brush technology is well understood.”

Museum and visitor attraction applications are among the leading and innovative markets with new and improved AV technologies, observed Anders Løkke, international marketing and communications manager for projectiondesign, Norway. The projectiondesign F32 is one of seven of the company’s high-resolution DLP projectors installed in the Giant Heart exhibit.

“This industry is pushing to come up with new clever ideas on how to engage visitors, and the integrators are the ones who make innovative audiovisual technology happen,” he said. “We see projects and installations pushing the boundaries of what AV products can do. For us, it has led to the development of new products that can not only serve these applications better by providing a better experience for the visitor, but also greatly simplify the maintenance and installation requirements for the integrator and systems manager.”

New projectiondesign products include the FR12 Remote Light Source projector series, which reduces maintenance requirements to near zero, and may be mounted where it cannot easily be reached. “This is achieved by removing the lamp and other important parts from the projector itself, and placing these in a rack up to 100 feet away,” Løkke explained. “Other significant product developments include our FL series, using LED illumination instead of a traditional lamp. Albeit at a slightly lower brightness level, LEDs pay for themselves by 100,000 hours of typical lifetime with no need for replacement. Currently, we have several visitor attractions projects running with both types of projector solutions.”

There are some significant changes ahead for the AV industry, he noted. “As visitor attractions are becoming more complex and visible, just ‘mounting some equipment and get a decent picture’ will no longer suffice. Serious consideration must be given to each single project, and significant experience is becoming a key ingredient. There is no substitute for training, education, and knowledge on how to deploy products into an application.”

The big change is not so much in resolution, though that has increased, but what’s really improved is the light output of these machines, said Andrew Kidd, business development manager technology consultant at Electrosonic in Burlington, NJ. “CRTs were less bright than the least bright projectors of today, which are now up to cinema standards. There is also a huge palette of choice in terms of resolution; you can get 4,000-pixel projectors, which allow us to create very large, very clean images.”

Electronics within or external to the projector allow for projecting in higher ambient light environments onto surfaces that are not “true screens and not necessarily flat,” he said. “At Gettysburg (National Military Park Museum) we were asked to use textured wooden surfaces as screens for a three-screen projection system. We selected a slightly brighter projector than would have been required on a normal projection screen surface because texture and color worked against us. We upped the projector power to compensate. At Hershey Park we projected onto a vertical wall surface that curves in and out, like a wave.”

Examples of Electrosonic’s interactive exhibits, with the aid of moderately large LCD and plasma panels, include multi-touch table at the Liberty Memorial (National World War I Museum) in Kansas City, MO, and various at the U.S. Holocaust Memorial Museum in Washington, D.C.

“Museums are part of the exhibit market, and the AV industry covers multiple markets,” Kidd said. “Technology used in corporate meeting rooms does not indicate what is happening in the exhibit market, but trade show exhibits have a bearing on how a museum may do it. Corporate lobbies with AV displays are more like exhibits.”

Talking with museum designers, he noted, involves a different conversation than, for instance, talking with a theme park client. “There are only a handful of theme park clients, big companies doing big stuff, and they tend to generate their ideas internally, do a lot of their own concept work, and hire a designer. Very few museums have their own design staff so they rely on the museum design community for most of their ideas. In the same way as when you hire an interior designer, they expect them to know what’s going on out there.”

It’s the same with museums, Kidd said. “I don’t think most designers think ‘projection’ specifically; they think of how they can best tell the story. If projected images can help them that is what they want. They think of the result, and the AV system designer’s job is to help bridge the gap between concept and end result. Every museum designer wants the new museum to contain something different.”