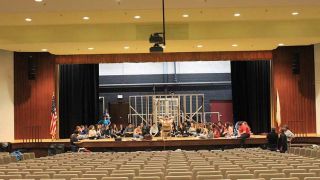 The auditoriums at both Pilgrim H.S. and Veterans Middle School in Warwick, RI have added NEXO GEO M6 speaker systems along with Yamaha TF3 Digital Audio Consoles to their 800-seat auditoriums. The auditoriums are used for school productions, assemblies, lectures, and movies. ATR Treehouse of Providence completed both installations.

According to David LaPorte, president, ATR Treehouse, the facilities were built in the late 1950s and were in dire need of retrofits. “The electrics and fly systems have been in place since the original construction,” he said. “The sound systems have been periodically replaced, but usually haphazardly using substandard or makeshift fly ware. They also lacked assisted listening devices and do not interface with fire alarm systems, now required by code. This all makes for a bad situation and an accident waiting to happen.”

Each auditorium’s system now includes six NEXO GEO M6 and one LS18 per side left and right, two NEXO PS8s for lip fill in the front of the stage, one NXAMP4X1, one NXAMP4X4, one Yamaha MTX3 DSP audio processor, and a Yamaha TF3 Digital Audio Console with Tio1608 stage box. “In one of the spaces, we were able to tuck the LS18s up in the ceiling, out of sight and away from anyone who may try to mess with them,” LaPorte said. “They still sound awesome!”

“I'm able to push more out of the system without feeding back,” said Richard Denningham III, a teacher at Pilgrim High School. “It sounds cleaner than what I had previously.”

Regarding the Yamaha TF3 Digital Audio Consoles installed at both auditoriums, Laurence Coch, ATR lead design engineer, said that the Yamaha name is synonymous with quality and dependability. “Beyond that, I thought the one touch button control, in conjunction with the presets library, would help students and novice users make the system sound consistently better,” he said.

ATR has provided various services to the Warwick School District over the years and paid close attention fulfilling the requirements of the recent installations with after-install servicing when required. “We're very happy with the new systems, and the installation and service provided by ATR Treehouse has been good,” Denningham said.