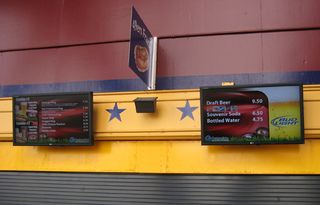 "In a facility this large, with displays so far apart, it was a significant challenge to send an HDMI signal from a single source to 100-plus TVs, all while maintaining the hot plug 5V to ensure that no TV turned itself off due to inactivity of the HDMI ports," said Kevin Goldsmith, director of digital media operations for Ping HD. "We've been an Atlona customer for some time now and have grown to trust and rely on their solutions. We didn't even consider other brands for a project of this magnitude."

Instead of running a single HDMI cable over thousands of feet and degrading the signal, Ping HD relied on Atlona's HDMI distribution amplifiers to ensure video quality. The AT-HD-V12 takes an incoming signal from a digital signage "master" TV, and then splits it into two HDMI signals, which are sent to two other TVs using Atlona's 50-foot-plus HDMI cables. To provide a constant hot plug, Atlona's HDMI EDID emulators (AT-HDSync) embed the incoming HDMI signal with a 5V current, which wakes up the TVs from standby mode.

“The system is up and running, and is not only being used to allow customers to view their choices of food and beverage, but also to show other important stadium and emergency information," added Goldsmith. "The digital menus are a hit with fans, and our client loves the simplicity and clarity brought by the ability to show digital signage on the TVs, as well as the level of integration achieved due to Atlona's products. Another important factor is the system's ease of use — it is totally self operating, which eliminates the need for a dedicated employee to monitor it."