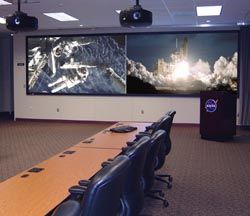 The Stennis Space Center opted for Wireless Computing's wireless keyboard (below) for use in its conference rooms after years of experiments.

Shelby Russell, lead audiovisual technician at Stennis Space Center, along with three other technicians, supports extensive AV systems in a visitor's center and 30-plus conference rooms located in various buildings across the center. Russell began purchasing wireless keyboards for use in what center personnel call their working meetings. In these meetings, engineers, administrative, or IT staff get together to work on a drawing, database, or other document, and they pass the keyboard and mouse around as various people contribute. "For safety and convenience reasons we really didn't want cables running across the floor," said Russell, "so I started shopping for wireless." After two years of experimentation with keyboards from various manufacturers in the conference rooms he supports, Russell developed four critical components needed in a wireless keyboard or mouse used in conferences.

He started out with one or two consumer keyboards that he bought at a local electronics store. "Most of these keyboards have a range of only six feet or so, and since the conference tables are all at least six feet from the computer, that really didn't work out too well." The other problem he found is that some consumer keyboards communicate with the computer via an infrared signal that's line of site, so as soon as someone steps between the presenter and the computer or if the keyboard is not aimed toward the receiver, it stops working.

Russell soon found a manufacturer of radio-frequency (RF) keyboards, which eliminated the line-of-sight problem and had a range of about 30 to 100 feet, depending on the model.

These seemed to work well at first, but he bumped into another, quite unexpected problem. "In order to save battery power the mouse would go into a sleep mode after about 30 minutes if it wasn't used. The average user didn't know that it was asleep, so they'd just try moving the mouse, which was not what was needed to wake it up. Oftentimes at that point they'd take the batteries out and put new batteries in, which caused an even greater problem."

In any installation with multiple conference rooms, you need to set each wireless keyboard and mouse to its own digital address. If you don't, a user in one room will start to control the computer in another and have his computer controlled or interfered with by the user next door. Russell said the keyboards and mice he purchased would drop back to their default address as soon as the batteries were changed. "We were having to run around to the various conference rooms at least twice a week to reset these addresses," Russell said. "That was a big waste of our time and the users' time."

"One of other things that happened with these keyboards," Russell said, "was that someone would be typing away and look up at the screen and notice there were missing characters." With most RF keyboards, communication is only one-way. But if there's any kind of RF interference, characters drop out. What's needed is enough logic in the system that the keyboard sends a character and the receiver very quickly replies that it got it. If the keyboard doesn't get the appropriate response, it sends the keystroke again. "Once we purchased keyboards with two-way communication, the chances became very slim if at all of having missed characters."

One potential disadvantage of an RF keyboard is security. Radio signals travel through walls, and it's not hard for someone to pick up unsecured keystrokes from the next room or even from a different building. "I don't think it was really a problem with the older keyboards," said Russell, "but since NASA and Navy personnel are having meetings containing sensitive information, we're really glad to have switched to encrypted systems." Encryption, it turns out, is not a costly option, and Russell said it has had no detrimental effect on his keyboards' performance.

Though all of these problems were frustrating, Russell said he was able to find another vendor who could solve them: Wireless Computing. The company incorporates two-way, encrypted, RF communications in all of its keyboards and mice, and they all have a 100-foot operating range. In addition, Wireless Computing stores address ID settings on an EPROM that will hold its memory if the batteries die or are removed.

"There are a lot of folks using the conference rooms every day," said Russell, "and they shouldn't have to waste their valuable time calling the help desk for something as simple as a keyboard or mouse." Russell is not necessarily endorsing Wireless Computing, but he does suggest that the features they include as standard are, in fact, what you need to look for in whatever brand of keyboard or mouse you choose. "I will say so far they're the best ones that I've found," Russell explained. "The main points you need, however, are the two-way wireless communications, the 100-foot range, encryption, and the retention of the ID address. Having all this, they fit our needs perfectly."