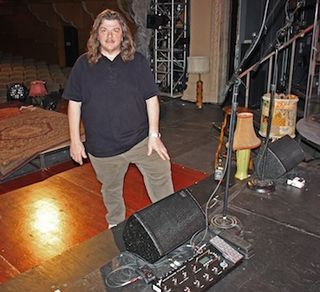 One Night with Janis Joplin takes audiences on a musical journey through the influences that shaped one of rock 'n' roll's most enduring legends. Mary Bridget Davies fronts an ensemble of top-tier musicians to deliver a powerful interpretation of Joplin's signature sound.

"This is a full-on concert experience with an exceptionally talented band and a powerful vocalist in the lead," explained Carl Casella of Sound Associates, the NY-based firm tasked with designing an audio system for the show. "The monitor system has to be extremely capable because it's delivering such dynamic and iconic songs to some very discerning ears."

Casella continued, "Over the years I've used most of the major brands but have always struggled to balance size, output and sound quality without stressing the budget. From the moment I first heard VUE's a-Class I knew they'd finally hit my mark. There's simply nothing out there that can touch these speakers in terms of sound quality and output for the money."

Casella designed a monitor rig that includes 15 VUE a-8 two-way systems powered by five Lab Gruppen FP3400 series amplifiers. A Yamaha M7CL48 at the FOH position delivers a total of 10 discreet mixes to the to the stage monitors.

"The a-8s were a breeze to set up and sounded amazing right out of the box--requiring virtually no EQ at all," explained Casella. "They're so well engineered that our performers can literally shove the mic directly into the monitors with zero feedback. I'm simply blown away."

One Night with Janis Joplin runs through April 15th in Pasadena before moving on to stints in Milwaukee and Washington, DC. Additional dates are in the works and will be announced in the coming months at http://www.janisjoplin.com/onenight.php.