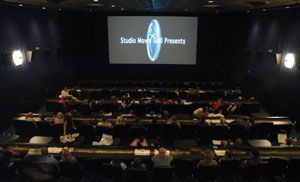 Despite a Proliferation of Smaller Cinemas, Business Lies Elsewhere

With hardly any new construction going on, existing theaters are renovating—but insiders think that will change in the next year, and premium cinema appears to be primed for that upswing.

But do these premium theaters—which in some cases are designed to compete with local IMAX houses and, by offering extensive food menus, alcohol, and waiter service, also attract a clientele that might not normally visit the multiplex—represent a business opportunity for commercial AV integrators, or even manufacturers?

“It’s an entrenched business,” cautioned Barry Ferrell, senior director of cinema solutions for QSC, as he headed to the International Cinema Technology Association’s 36th annual convention in Seattle, WA last month. “There are probably six cinema dealers in the country that do any volume whatsoever, and every major circuit deals direct. I could make 20 phone calls and talk with 80 percent of the business available in the entire United States.”

John Gott, president of SLS Audio, agreed: “As far as getting directly into cinema, it takes a long time; you don’t just jump in. We’ve been in there since 2004, and it’s taken this many years to get some traction.”

SLS Audio’s dedication has certainly paid off. Last year the company supplied a massive speaker system to Regal Entertainment, which, with nearly 7,000 screens, is the largest movie theater operator in the country, for a new Regal Premium Experience, or RPX, theater in Boston, MA. That system design, which utilized the company’s 6500 series products, was duplicated at a new RPX auditorium in Denver, CO.

“We did the very first line array system in the world, as far as anybody knows” in a cinema, added Gott. That system, in a 500-seat auditorium at a Wehernberg Theaters multiplex in the suburbs of St. Louis, MO, was followed by similar installs for the Santikos chain in Texas, including a large multiplex in Tomball, outside Houston. “It’s all line arrays, all 19 screens,” he reported.

QSC, too, has plenty of movie theater installs under its belt, especially premium venues such as RPX, AMC Theatre’s ET X (Enhanced Theatre Experience), and Carmike Cinemas’ Big-D, according to Ferrell. “We’re the largest provider of equipment to those premium cinemas. The AMC ET X is 100-percent QSC systems, with some of our largest, most powerful screen channels, and tons of surrounds.”

The premium cinema experience is a global phenomenon, Ferrell noted, and began in Australia, with plenty of business also coming to QSC from Japan, Korea, and elsewhere. “One of the most advanced theaters is a 14-plex in Ecuador. The big auditorium has a cinema system and a complete QSC WideLine line array. They can do concerts in the same room. A guy in the Netherlands did the same thing.”

Premium cinema appears to be here to stay, Ferrell continued. “I think every major complex within a large metropolitan area that has the population to support it will probably add some form of premium experience auditorium—at least one. There’s virtually no new construction going on, because the developers aren’t building any malls, so there’s no place for the theaters. If the theater circuit can’t build new theaters they have to do something with their budgets, so they’re basically renovating existing properties. My gut feeling is 2012 will see new construction start.”

But with the major chains dealing directly with manufacturers and installing the gear using in-house technical teams, independent audio integrators seem unlikely to get in on much of the action. Ferrell, who reported that QSC maintains totally separate pro audio and cinema product sales channels (cinema dealers typically also carrying processor, projector, screen, and related product lines), has observed some problems with non-cinema specialists getting involved in movie theater projects.

“Our biggest complaint when trying to deal with the pro audio guys when they dabble in cinema is that they have no concept of the SMPTE 202M standard for calibration and tuning,” he said. “They try to do things the way they would normally, with lots of subjectivity and bringing in a Smaart [analysis] rig, which results in a non-standard situation.”

The SMPTE standard sets out the level and tonal characteristics, formerly known as the X-Curve and, historically, Academy Curve, used on film studio mixing stages and for playback. “If someone tweaks the subwoofers and surrounds to play louder than the standard they’re not staying faithful to the original mix,” he noted.

Neal Rockman, whose Cardinal Sound and Motion Picture Systems has provided technical and sales support in the Mid-Atlantic region since 1975, has seen the same problem from the other end of the scale. “Once home theater came around everybody became an expert in multichannel sound. Unfortunately, in larger spaces, there are still people who are trying to adopt a giant home theater system rather than something specifically made for a larger auditorium.”

In Rockman’s experiences with boutique screening rooms, “Often they’re done with a very high-end, high-fidelity [audio] system integrated into a digital cinema system where we may or may not have had direct input into that design.”

Rockman added, “I’m not trying to be negative, but there have been so many changes in the last five years. One of the things that I see is less and less emphasis being put on consistent audio quality.”

Similarly to the switchover to digital HDT V, audio has taken a back seat in the current transition phase as content creators drive exhibitors to adopt digital projection by the end of 2013. “Most of these digital cinema installs are being done on top of whatever was there,” observed Rockman. “They’re not upgrading sound, they’re simply putting money into the projector because that’s the demand.”

Look for business in home theater, advised SLS Audio’s John Gott. “There’s probably more potential there, with people still building nice rooms in their houses. Then there are corporate screening rooms, and boardroom applications, too.” Pro audio products can offer cost savings and a better spec than some expensive home theater systems.

Da-Lite Screen Company’s Pico Screen was designed with Pico projectors in mind for creating lightweight, portable projection systems for business meetings, training, gaming, and other applications. Setup simply involves removing the screen from the carrying case, pulling the two halves of the case apart, and placing the screen on a table or stand. There are no latches or feet to deal with. Fully expanded, the viewing area of the screen is a 30-inch diagonal HDTV format. Since the screen maintains a constant height and is fully adjustable, an NTSC video format can be achieved to accommodate a variety of source materials. The Da-Lite Pico Screen is standard with Video Spectra 1.5 gain screen material. In the closed position, the screen case measures 19 inches long and weighs five pounds.

Harkness’ Perlux brand gain screens include both 2D and 3D screen surfaces for any size screen application. The Perlux Digital retains all the features of the Perlux line, and is additionally optimized for digital projection. Appropriate for larger screens with active and passive 3D technologies (not using polarized light), such as Dolby 3D, and for large 2D screens, Perlux Digital requires minimal color correction during projector setup, thus reducing the complexity of converting to digital. Perlux Digital is 30 percent whiter than the prior Perlux formation while maintaining the same brightness, viewing angles, and invisible seams.

The dnp Zenith rear projection screen line is designed for the 100-inch-plus market, including TV studios, conference rooms, home entertainment, and multiple screen installations, i.e. simulation or control rooms, where high-quality images are essential even in unfavorable, high ambient lighting conditions. Designed as a complement to high-performance projectors, dnp’s Zenith screen helps prevent hotspots, which high lumens projectors can result in, from showing up on screen while improving both contrast and brightness uniformity, and balancing viewing angles.

Stewart Filmscreen’s Silver 5D is constructed from fabric that offers passive 3D polarization while maintaining performance for 2D sources. The screen preserves most of the performance of Stewart’s leading Silver 3D fabric while improving uniformity, reducing hot spotting, and offering a wider viewing cone. Available in seamless sizes up to 40x90 feet, this hybrid 5D fabric is available in fixed frame, retractable, and variable masking models that can be Microperforated for acoustical transparency, so speakers can be hidden behind the single screen without negative effects on sound quality.

The Insta-RP pliable rear projection material from Elite Screens is an adhesive optical rear projection material that is made of a durable polyethylene terephthalate (PET) material that is designed for excellent contrast and textured for optimal uniformity. It delivers a 2.2 gain image that is appropriate for applications where there is either controlled or ambient light, such as retail storefront windows, resorts, restaurants, and nightclubs. The Insta-RP material installs quickly on any glass surface for converting ordinary window space into a video presentation, and it is made for both small and large commercial venues.

The Full White screen from AV Stumpfl features a surface mounting system that allows for images projected from edge to edge without borders. The modular, patent pending plug-in frame system can create multiple screen sizes in any aspect ratio and allows for most frame sizes. A hollow chamber profile with a trapezoid shape boosts stability and allows for a wrinkle-free application of the surface on the backside of the profile with hooks or Velcro.

Draper has expanded its Access screen line of motorized, ceilingrecessed projection screens with the Access XL screens, offered in a range of large sizes. Access XL projection screens offer many of the features of the existing Access screens—including Draper’s “case first screen later” feature to avoid screen damage during construction. The Access XL is available in non-tensioned sizes up to 20 feet wide and tab-tensioned sizes up to 18 feet wide.

Vutec’s Retracta-Vu Pro Traveller and Retracta-Vu Traveller Projector Lift are geared toward the rental and staging market by providing instant installation with no assembly required. Users just need to connect to a power outlet for an instantaneous presentation. Designed and engineered for all size venues from hotel meeting rooms to open air concerts, the solution is appropriate for the transport and presentation of a portable theater. Retracta-Vu Pro Traveller is a self-contained rising screen on wheels, saving time by eliminating assembly. The Retracta- Vu Traveller Projector Lift is a scissor lift that raises the projector to the desired height.