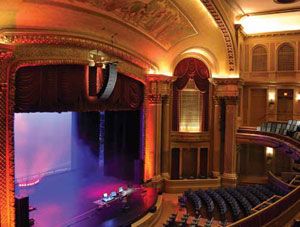 Historic Hawaii Theatre Upgrades Sound to Match its Gilded Past

HONOLULU, HI—Built in the golden age of elaborate movie palaces, Honolulu’s Hawaii Theatre is an exquisite example of the gilded glamour that characterized its era. The Hawaii opened its doors in 1922, decades before Hawaiian statehood, making a strong statement that Honolulu was no backwater.

Today, the Hawaii Theatre is as elegant as ever, with an ongoing series of plays, concerts, comedy, dance, and screenings that contributes to the cultural life of Honolulu. It’s a remarkable turnaround for a building whose gradual decline, starting in the 1960s, led to closure and abandonment in 1984. In 1996, the restored facility re-opened as the Hawaii Theater Center, a 1,400- seat multi-purpose performance venue.

Historic authenticity notwithstanding, the center’s goal of providing a state-of-the-art performance space requires a sound system capable of performing to the highest modern standards. At the time of the mid-1990s, restoration that meant a system built around Electro- Voice’s DeltaMax series of loudspeakers. But as sound reinforcement technology advanced, it became evident that a new sound system could provide even better sound while meeting the more demanding requirements of today’s touring shows and concerts.

The task of upgrading the system was put on the shoulders of Buck Tallman of Quantum Sales & Technology, the regional Electro-Voice representative for Hawaii. Custom Audio of Kaneohe, HI, an installation, rentals, and event sound company, was Quantum’s key local partner on the job.

Tallman found the ideal box around which to build his design in the very compact and lightweight Electro-Voice XLD281 dual eight-inch line array element. Designed for biamp or triamp operation, the XLD281 is a full-bandwidth three-way box in EV ’s XLVC series of installationfocused arrays. With EV ’s Coverage Control Technology (CCT), the box maintains 120-degree horizontal coverage down to 250 Hz.

Designing the entire system around the XLD281 was made easy with the use of Electro-Voice amps and DSP. Fifteen CPS amps are used in all: five CPS2.9s, nine CPS2.12s, and one CPS8.5. Each amp is equipped with an RCM-810 card that functions as an IRIS-Net remote control module. While the DSP on the RCM-810 cards is used for supervision and load matching, the audio processing is handled by a NetMax N8000-1500 digital matrix controller.

Once the system was designed, it was primarily up to Jeff Kang and his team at Custom Audio to get it up and running. “We tackled the loudspeakers first,” Kang said. “The EVF -1181S subs were fit into the existing bunkers with fractions of an inch to spare. Then came the six Xi-1082s for under-balcony, which were painted to match the ceiling color. The locations were spiked to within inches of the designed placement and approved by the theater before mounting. The four Xi-1082 front-fills were simply placed, but custom speaker cable was built to allow the orchestra pit to move freely behind them. The QRX subs in front of the proscenium arch also needed custom speaker cable to allow the fire curtain to close without obstruction. The final part was to hang the XLD281 array on an existing frame suspended from a permanent hoist. We gained an additional foot of clearance for sightlines by re-engineering the existing frame and tucking the XLD grid right up to it.”

All in all, Kang said, “The system was well designed and has excellent coverage. The XLD281 is a great-sounding fullrange box, very intelligible with a very smooth midrange, and not a lot of hassle either to rig or to EQ. Having made a couple of pre-site visits, there were not a lot of unforeseen issues during the install itself.”