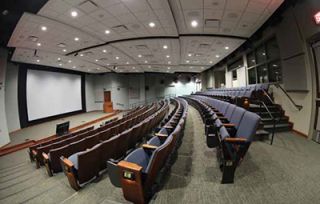 The design objective was to give DMC users the utmost flexibility for everything from film showings and interactive digital media presentations, to experimental music concerts and intimate meetings. Enabling this flexibility is a Meyer Sound cinema system and Constellation acoustic system installed by Miami, FL-based Pro Sound and Video.

The tech-laden 200-seat auditorium at DMC is the world’s first venue to offer a full SMPTE-standard, 7.1-surround Meyer Sound cinema system along with a Constellation system. The combination of the two, coupled with 4K digital projection by Christie, provides a vehicle to enhance Louisiana’s digital media industry and promote collaboration among its users, who include students, researchers, and corporate partners such as EA Sports.

“With the Meyer Sound systems, we can present any works developed here at LSU, or coming to us via the worldwide CineGrid high-speed network, without being limited by what we can do with audio,” stated Dr. Stephen Beck, director of LSU’s School of Music and faculty member of the Center for Computation and Technology (CCT). “Also, we have a significant investment in sound diffusion research, where we create different acoustic environments. We wanted a space where we didn’t have to set up a custom configuration for every concert.”

The 200-seat auditorium at the Louisiana Digital Media Center is the world’s first venue to offer a full SMPTE-standard, 7.1-surround Meyer Sound cinema system along with a Constellation system. DMC is the university’s second room with a Constellation system; the first system was installed in the 1,100-seat Union Theater in 2011. At the press of a button, Constellation can transform a room from a concert space to a screening room. The system in DMC also includes the voice-lift feature, which allows the auditorium to double as an intimate meeting space where both presenters and audience members can be heard easily, with no need for microphones or raised voices.

“We just had our first all-hands meeting of the CCT in the auditorium,” reported Dr. Beck. “Finally, we have a space where we can have free-flowing conversations and share any kind of media presentation with the whole group, with no technical limitations.”

Using the patented VRAS algorithm, a D-Mitri digital audio platform is at the heart of the Constellation system. The system also includes 24 microphones, as well as 12 Stella-8C and 26 Stella-4C installation loudspeakers, 16 UP -4XP 48 V loudspeakers, and eight MM-10XP 48 V subwoofers. Ten UP J-1P VariO loudspeakers and eight HMS-10 cinema surround loudspeakers are used for both Constellation and the Meyer Sound cinema system, providing surround sound for the latter.

“With both Meyer Sound systems, we’re able to create audio for the digital arts formats and concepts of the future,” said Dr. Beck. “We are giving our students access to the most advanced technologies, so when they graduate, they can move them into the commercial mainstream. We have the technology to do it right now, and we’ll let everyone else catch up to us.”

Identical to what is found in many high-end cinemas and Hollywood screening rooms, the room’s Meyer Sound cinema system comprises one Acheron 100 and two Acheron 80 screen channel loudspeakers, as well as six X-800C cinema subwoofers. As both Constellation and the cinema system are connected to the D-Mitri platform, the two systems can be fully integrated to create custom immersive audio effects.

In addition to the auditorium systems, 106 more Meyer Sound loudspeakers are installed in other locations throughout the DMC, including Stella-8C loudspeakers, UP J-1P loudspeakers, and HD-1 studio monitors.