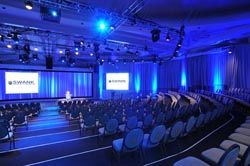 Theme lighting creates the ideal mood for a Swank client in California.
While both markets differ in how they're approached initially, Brady finds that they're very similar. "What's really different between those markets, is in the way the customer purchases the services required. We've always been a company that's been focused on what the customer wants, and there's a lot of them that desire to purchase their AV and draw the creativity for their events with the hotel when they visit. But there's a large group of clients that would prefer to partner with an AV company. In that case a lot of them are buying their AV needs separately from the process of choosing their meeting venue. We try to provide services to either group, whether in house or with the event services team. We want the event to look and feel the same either way."Swank treats their inventory a bit differently when purchasing new gear, as Brady recalled. "What we do with purchasing that's a bit different, is we empower our team members to drive that process because they're the ones talking to the clients. We have a purchasing and R&D division that's composed of people from the field, and they work together to drive that. In our business, there's always a bit of a trickle down. Whatever's happening on the cutting edge has to trickle down to the meeting market before people get comfortable with it. So we keep our eyes open and really empower our teams a lot."

The Event Services team at Swank dazzled a client in Orlando, total attendance was 7,500.
For such a large and sprawling company, training is mandatory to keep everyone on the same page. Swank has taken on exhaustive campaign to provide each employee with the latest information for the industry. Brady noted, "In the last few years, we've invested heavily into training. Part of our process is all fulltime new hires are brought to our training center in St. Louis within their first 30 days of employment to spend a week training. We have a training facility with a mock ballroom and AV showroom built. On the average all our team members attend over two weeks of training a year. What's unique for us is all our training is very employee driven. Our classes are written, composed, and delivered by our team members. I don't think anyone learns more than the teachers themselves."

Brady places the success of Swank on this training initiative, "It's very beneficial to us and it's probably the lead advantage we have. AV is always so focused on equipment, but the reality is that it's really a people-driven business, because they are the ones that interface the technology to help deliver that message. And that's what's driven our growth, we can only grow as fast as having the right people provides, and that training system has really done wonders for us."

Brady also places the company's success on a single outlook on the industry, "What's really interesting about the future, is the most successful companies in our business will be the ones that see the line between the event services companies and the in-house companies. The best companies will not only blur those lines, but significantly erase it and understand that the customer is looking for the same thing across the board."