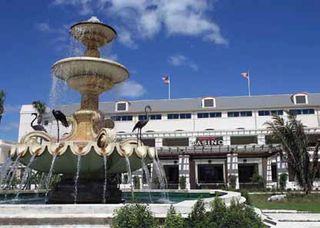 Constructed in 1932, Hialeah Park is an architectural wonder in southern Florida that hosted some of the world’s finest horseracing until it shuttered its doors in the late 1990s under pressure from the shifting tides of modern gambling.

Hialeah Park recently leveraged the weight of that history to launch Hialeah Park Racing & Casino, which pairs quarter horseracing with a casino built into the interior of the historic grandstand. A new sound system infuses the casino with full-fidelity music 24 hours a day, seven days a week using 22 SymNet Edge Dante-networked audio DSPs modularly outfitted with 12 inputs and 300 outputs.

“The casino has nearly 900 slots, 23 poker tables, and several restaurants and bars located across 150,000 square feet,” said Byard Hey, sales manager with NDR Systems, the Fort Lauderdale, FL integration firm that installed the new sound system. “They were very careful to restore all of the architectural motifs that make Hialeah Park such a regal place.”

Kinsella-Marsh Group of Miami Beach, FL designed the system around a different processing arrangement, but Hey pushed for Symetrix. “I’ve been using Symetrix for years, and the installations always go smoothly and the equipment always holds up,” he said. “Moreover, the new SymNet Edge met all of the design requirements and then some. It has a modular I/O that could easily accommodate the lopsided I/O count of this job. Importantly, the SymNet Edge is based on the future-oriented Dante network, whereas the specified processor was based on the now-fading CobraNet technology.”

Each SymNet Edge frame can be filled by up to four I/O cards. The available I/O cards cover the full range of possible I/O needs, but for Hialeah Park Casino, Hey simply installed three four-channel analog input cards and 75 four-channel analog output cards into 22 SymNet Edge frames. While each Edge frame has its own processing resources, the whole system acts as one integrated whole via the Dante network. Each speaker location includes a five-inch loudspeaker, an eight-inch loudspeaker, and a subwoofer. All the components are Tannoy with the SymNet Edge processing turning each location into a three-way system. Lab.gruppen amplifiers are used for power.

“Dante is great, especially for this type of installation,” said Hey. “It’s a communications protocol of the future, which will make any future requests easy to accommodate. It has a dual network topology, which makes it more robust, and it is so easy simply to wire it all with Cat-5 jumpers. The SymNet Composer software is intuitive and allows me to see the entire system or dig down as necessary. The casino has been running 24/7 for several months now without a hiccup.”