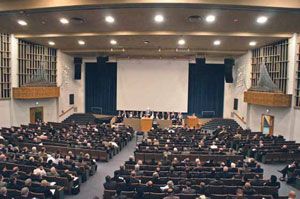 An Acoustically Challenged Oakland Temple Gets the Sound it was Missing

The Oakland project represents the latest in a series of installations of Bose’s new RoomMatch loudspeakers and PowerMatch amplifiers, which were launched in September 2011.

OAKLAND, CA—The 1,800-seat Interstake auditorium at the Oakland California LDS (Mormon) Temple has presented significant challenges to sound system designers ever since the facility first opened in 1964. A recent sound system upgrade not only overcame those challenges but also proved to be both a cost and time-saver.

“The room is acoustically difficult, with strong, focused echoes, somewhat heightened background noise levels, and overall a ceiling that is too low for that type of room,” explained Ken Dickensheets, CTO/principal consultant at Dickensheets Design Associates in Austin, TX. The room, which is used for conferences and music, dance and theatrical performances, has a very deep balcony with a low under-balcony.

The Oakland project represents the latest in a series of installations of Bose’s new RoomMatch loudspeakers and PowerMatch amplifiers, which were launched in September 2011. “The overriding consideration was speech intelligibility with the added need for excellent musical quality,” said Dickensheets. “When we looked at other speaker systems we could address some of the issues but not all of them; this one addressed all of the issues.”

Not that he was unfamiliar with the system; Dickensheets already has several other RoomMatch projects under his belt, and was also involved with Bose on the design and development of the system. “Part of the reason we were confident in the performance of the system in this room was our acquaintance with many of the members of the Bose design team, who have long, successful track records with other high-end speaker and amplifier companies in the industry,” he said.

“There are two RoomMatch hangs at the proscenium and two halfway back in the room, then five for the balcony,” said Dickensheets. An additional module provides stage foldback.

“We were able to keep most of the direct energy off the rear and side walls,” Dickensheets reported. “It enabled us to get very even sound coverage in the room, better than plus or minus one dB at two kHz with very high intelligibility.”

The system operates in two modes, one unattended, for conferences, and the other for theatrical events using the Yamaha console. A Biamp AudiaFLEX processor handles room tuning, routing and control up to the Bose amps, which are loaded with the speaker parameters, while an Ivie Technologies iFlex 1280 supports automatic operation.

One unique technology in the new Bose arrays, the Continuous-Arc Diffraction- Slot (CADS) manifold, has eliminated throat distortion, obviating the need for corrective FIR filtering. “On most conventional systems, when we get the speakers aimed and the crossovers put in, we’re about 20 percent along in the tuning process,” observed Dickensheets. “What we found with this system is that by the time that we’ve put the crossovers in the amplifiers and turned the system on we’re 90 percent of the way along. We’re left to worry about room problems and not system problems.”

Not only was it more time-efficient, but it saved money, too, he reported. “The estimates for this system came in below comparable systems, so we had a lower cost and higher performance.”