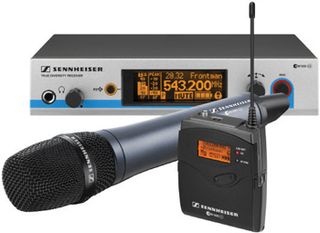 The G3 System from SennheiserPhiladelphia-based Cottage Films—the husband and wife team of Jason and Rebecca Ferris—is making a documentary to turn the nation’s attention towards the cultural and geographic impact of coastal erosion. The duo employs cinema verite style in their film “Can’t Stop the Water” to explore the human cost of the disappearing wetlands. Integral to the project are the team’s commitment to telling the whole story and portable AV tools that let them film reliably in the unforgiving climate of the Gulf Coast.

The Southern Louisiana coastline is disappearing at an alarming rate due to coastal erosion. Some two thousand acres of land has vanished in just the last century, making it the fastest-disappearing landmass on Earth. Rebecca says that in the next fifty years this devastating trend will continue if no action is taken.

The primary causes of this problem are man-made structures—river levees that starve the marsh of fresh water and oil company shipping canals that cut through the land, allowing salt water to encroach. Recently, the disastrous BP oil spill has added another layer of trouble to a crisis that was already overwhelming families and businesses in the region. If this weren’t bad enough, future sea level rise threatens to exponentially worsen the effects of coastal erosion.

The disappearing coastline is on the minds of many residents, scientists, artists, and activists in the South, but Rebecca said that the idea for the film came after moving to Louisiana in 2008 and reading a particularly powerful book. “Bayou Farewell: The Rich Life and Tragic Death of Louisiana’s Cajun Coast,” by Mike Tidwell, is a lyrically intense travelogue that tells the unique story of southern Louisiana through personal narratives of local Gulf Coast citizens. It’s a collection of portraits— everyday life in an extreme environmental situation. Rebecca was so inspired by the book that she and Jason drove to one of the Louisiana communities described by Tidwell—the Isle de Jean Charles—and began to meet the people who live there.

“We immediately knew that there was a significant story here that needed to be told,” Jason said. “We were also welcomed so warmly into the lives of our characters. For us, our activism on their behalf comes directly out of the personal relationships that we have formed with them.”

Isle de Jean Charles is located in Terrebonne Parish, Louisiana, situated between Bayou Terrebonne and Pointe-aux-Chene. The island was once an expansive paradise of woods, wildlife, and freshwater ponds on which several hundred Biloxi-Chitimacha-Choctaw Indians lived and worked. Now, it is a narrow and exposed sliver of eroding marsh, on which just a few dozen people are attempting to make their livelihoods. Because of the small population, the Army Corps of Engineers has excluded the island from its levee protection zone, leaving it utterly exposed to the hurricane storm surges that seem to arrive each year like clockwork.

Cottage Films’ Jason and Rebecca Ferris (left and far right) stand with Chief Albert Naquin on Isle de Jean Charles, Louisiana, during the making of “Can’t Stop the Water.” “We can’t simply let an entire community disappear and expect that this will be the end of it,” Rebecca Ferris said.The Chief of the tribe, Albert Naquin, has dedicated his life to helping his community relocate. Tired of enduring the constant flooding and rebuilding, he left the island years ago for higher ground a few miles north. Since then, he has worked tirelessly to support the tribe members remaining on the island and to raise the funds necessary to purchase land where the islanders can relocate as a community.

“As with all documentaries, the human element comes first,” Rebecca stated. “I hope that people will relate to the characters in our film as the warm-hearted, authentic, and complicated people that they are.” Rebecca also hopes that viewers of “Can’t Stop the Water” leave with an appreciation for the grave environmental situation affecting the local community.

The film is an opportunity for people to make connections—to understand the decisions that led to this crisis, to advocate for coastal restoration, and to appreciate that this is not an isolated issue. Coastal communities all along the Gulf Coast and in many other parts of the world are experiencing the same pressures from man-made environmental changes.

“Nature doesn’t recognize territorial borders,” said Rebecca. “We can’t simply let an entire community disappear and expect that this will be the end of it. If Isle de Jean Charles washes away, it means that other communities are also in danger.”

The individuals and families featured in “Can’t Stop the Water” are left with difficult choices. Without significant government aid, there may be no hope of preserving the land that connects them with their ancestors. Yet, even Chief Albert’s more modest plan to relocate his tribe to higher ground faces an uphill battle. He has been unable to secure support from government agencies to help move his community.

Cinema verite—“truthful cinema” in the French language—is a style of filmmaking popularized in the 1960s that follows characters as they live their lives with as little interference as possible. The Ferris team says that they employ cinema verite so audiences can connect with the authentic voices at the heart of the story. Rebecca Ferris has more than a decade of experience in the documentary industry as cameraperson, editor, director, and producer. Her work has been shown on PBS, HBO, The Sundance Channel, and in dozens of International Film Festivals. Rebecca and Jason’s film “Miller’s Tale” debuted nationwide on PBS in 2011.

But besides a passion for storytelling, Cottage Films also requires AV gear that gives them the freedom to capture footage whenever and wherever needed.

THE CHALLENGES OF ON-SITE FILMING

Pictured is
the Lectrosonics
UCR100 series
wireless mic kit. Jason Ferris said the Cottage Films team needs reliable, portable
equipment for
shooting on
location.The Louisiana coast, with its near constant heat and humidity, presents unique challenges to any film project. But this was magnified for Rebecca and Jason by the fact that they were shooting in a remote area, often in boats.

“It was very important to have solid, reliable equipment that we could count on,” Jason explained. “Yet, we also needed our set-up to be affordable. We put together a customized package that worked very well for our purposes. For sound, we used a Rode NTG-3 shotgun mic with a Rode Blimp windshield. The blimp was critical for shooting in the wind and on the water. We used a couple of wireless mic kits—a Lectrosonics 100 series and a Sennheiser G3. Both of these were paired with Tram TR-50 mics. We ran the sound through a Wendt X-3, which we found to be an excellent and affordable mixer.”

“This was the first full-length film for which we used a DSLR—a Canon 7D. This proved to be a challenging but very positive experience,” Rebecca said. “The Canon has a reputation for overheating, but this was never a problem for us, even in the dead of summer in the bayou. Because we shoot mostly verite, we needed a way to mount the DSLR on Jason’s shoulder. After researching available solutions, we chose a Redrock Micro system that performed very well in the field. Jason used a Hoodman loupe on the camera, which worked okay but often suffered from fogging.”

“We paired the Canon 7D with, primarily, three different lenses. A Canon 16-35mm, a Sigma 24-70mm, and the Canon 70-200mm,” she added. “All the lenses are excellent and the 70-200 is tremendous. Jason would often use it for interviews because of its clarity and bokeh.” According to Nikon, Bokeh is defined as “the effect of a soft outof- focus background that you get when shooting a subject, using a fast lens, at the widest aperture, such as f/2.8 or wider.” Simply put, bokeh is the aesthetic quality of out-of-focus blur in a photograph. “We occasionally used other lenses for specialty shots (including the Zeiss 100m macro, a very fun lens),” Rebecca added. For occasional interviews, they used a Lowell lighting kit.

“The issue of coastal erosion is immense,” Rebecca stated. “While the Isle de Jean Charles community is among the first in the United States faced with relocation as a result of eroding land, they will not be the last.”

“There are solutions to this problem,” Jason said. “There are ways of protecting and rebuilding land, but it will take a significant effort.” It requires commitment and desperately needed resources. It’s also putting people first—seeing the bigger picture. With help from Cottage Films, viewers of “Can’t Stop the Water” are sure to get the message.

The documentary is scheduled to debut in 2013.

Ashley Blume is a writer and researcher for AV Technology magazine, and a site editor with EHR Intelligence.

The new MKE 600 shotgun microphone from Sennheiser provides video journalists with a microphone that can master even the toughest video sound challenges. Its high level of directivity ensures that it picks up sound from the camera direction with minimal background noise. The switchable low-cut filter makes sure that handling and wind noise is also minimized. Users can expect speech reproduction with high intelligibility.