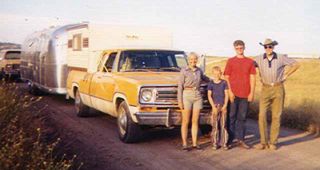 Don and Carolyn Davis with their famous Airstream and some locals in Rancho Carillo, CA. The best tales always begin with a vignette, a picture frozen in time. The story of SynAudCon (Synergetic Audio Concepts), the pioneer in audio engineering training, starts with this scene: The year is 1972; the setting is Rancho Carillo, CA in the Santa Ana Mountains. Don Davis, vice president of Altec Lansing, and his wife, Carolyn Davis, have just returned from Europe, where Altec has asked Don to take on the task of VP Europe.

“I realized for various reasons that the offer for Europe would be a mistake,” Don said. “So Carolyn and I made a list of things we liked to do and that included writing and teaching, and traveling. My other hobbies, of course, are cars—I used to take Porsches out on the race tracks—target shooting, and audio.”

Don resigned from Altec, and SynAudCon was born, influenced, in part, by the beliefs of philosopher/futurist Buckminster Fuller after the couple met him in Chicago. The Davises then spent the next several months penning the first edition of Sound System Engineering, the oft-updated quintessential read for any audio engineer.

After publication, they took it all on the road in their state-of-the-art Airstream. Their mission: to offer much-needed real-world audio education, fueled by Don’s enthusiasm for teaching and years of audio experience. The first SynAudCon class, on the basics of engineering, was held in May 1973 at the Ambassador Hotel in Los Angeles, CA .

“Carolyn and I started SynAudCon in order to share knowledge,” Don said. “People really wanted it badly. They may have been successful without the fundamentals, but when they discovered the reasons why things weren’t working, they said it changed their lives. But all we did was to enable them, and then they took off.”

The Davises’ 65-year marriage is part and parcel of SynAudCon’s success story. “We’re like a pair of horses hitched together,” Don said. “She’s the damper on my wild side; she tamed me early and fast.”

Carolyn has her own stories from years in the audio industry. “I used to go to all the AES shows with Don. He became an AES Fellow in the late 1960s. I was one of the few women who wanted to join, so I applied and they told me I could only be an associate. I said no. I contacted the chief engineer at Altec and Dr. (Leo) Beranek, and AES accepted me as a full member and eventually a Fellow.”

Inveterate travelers who had been abroad more than 20 times, the Davises were in Tokyo in 1992 when Don woke up and told Carolyn that it was time for a change. It arrived in the form of electrical engineer Pat Brown and his wife, Brenda Brown, who took the SynAudCon helm a few years later.

The Browns’ connection with SynAudCon began a few years earlier, when an instructor had to cancel on a class being held at the Davis farm near Norman, IN . “We knew of Pat, who lived an hour away and had been reading Don’s papers,” Carolyn Davis said. “We asked him to come to teach on short notice and we never used anyone else after that.”

With the industry in a major transition into the computer age, Pat Brown, who had attended SynAudCon seminars and had a small contracting/consulting business, proved the ideal choice for the handover.

“In October 1995, Don and Carolyn asked us if we would be interested in continuing SynAudCon,” Brenda Brown said. “They had one request: that we work together as a husband and wife team. My profession was nursing and I loved my job, but I knew it was Pat’s time.”

Pat and Brenda Brown have been SynAudCon’s owners since 1996.

It was a courageous move for a couple with three young children, but in January 1996, the Browns became SynAudCon’s owners, steering it on their own path. “Pat immediately took the seminar presentation from overheads to video projection,” Brenda said. “He is fascinated with the latest technology. He continually upgrades his presentations, taking them to the next level, particularly if he finds a better way to demonstrate a principle.”

Within a few years, the couple realized and appreciated the wisdom in the “husband-wife team” request. “SynAudCon requires traveling together with Pat teaching and me coordinating the training events,” Brenda said. “We each have our strengths and we trust each other. My nursing experience helps, because I really enjoy people.”

In 2010, SynAudCon released its initial web-based training program, developed by Pat Brown. Today, it offers both web-based and in-person training. SynAudCon customers include anyone in the audio industry, with integrators and their employees forming the largest customer base.

SynAudCon is also known for its specialty workshops, such as those on EQ, speech intelligibility, and conference systems. “We bring in the world’s top authorities on these subjects,” Brenda said. “Until recently, universities did not offer special audio related degrees. Most audio practitioners ‘back into’ audio; they end up as audio techs for various reasons. Many have electrical engineering, music, acoustics, or similar degrees. SynAudCon has sifted through vast amounts of audio related theory, and our focus is on teaching the practical principles of audio. We take the customer’s current understanding, expand on it, and connect the dots so things make sense. Their confidence level goes way up.”

It’s no secret that the future of training is the internet. Always available, and not limited by distance, web-based training is affordable, with lower course fees and no travel required. “The younger generation is especially comfortable learning this way and we have taken it worldwide,” Brenda said. “But I think the in-person seminars will remain, because personal interaction with the instructor and with others within the class leaves a lasting impression.”

In addition to both web-based and in-person training, SynAudCon is also known for its specialty workshops, such as those on EQ, speech intelligibility, and conference systems.

As for the Davises, they still live on the 500-acre Indiana farm settled in 1858 by Carolyn’s great-great grandparents. “All of our friends in the industry still stay in touch,” Don Davis said. “I’m 85 and still don’t need glasses for driving. I’ve got a good shooting range and a nice, fast car. It’s all been a blessing.

“We’ve kept a low profile and had a full life. All the awards and a buck will buy you a cup of tea, and being high profile is a total waste of time. I’ve never been jealous or competitive; I embrace talent and have been able to bring it forward. Carolyn and I made sure anything good got out there.”

Karen Mitchell is a freelance writer living in Boulder, CO.

Per Forsberg, president of Audio Architects, attended his first SynAudCon class in Minneapolis in 1981, and it changed the course of his life.

“I owned and operated a music store at the time,” he said. “The retail music industry was not my natural environment; I never became a musician. My undergraduate major was zoology and my minor was chemistry, although I took a lot of math and physics.”

SynAudCon taught Forsberg that there was a science to designing, installing, and tuning a permanently installed sound system. “No one in our market at that time was practicing this science. I promptly set out to change my corner of the world. I became a ‘sound science’ evangelist.”

Early on, Forsberg lost as many jobs as he won. “My designs were always more expensive than those of the competition, and the average customer was, and still is, mathematically illiterate and has never even been exposed to physics. Imagine me standing in front of a church committee asking them to recall their high school physics classes where learning all about reflection, refraction, and diffusion, etc. It was years before my extremely smart wife convinced me that practically no one, including her, had studied physics in college, much less in high school.”

But he persisted, selling the music store and committing to using the principles learned from SynAudCon to conquer the world. “That was almost 30 years ago and I haven’t stopped preaching, teaching, or learning. Eventually, I was even able to make a decent living at it, but the most important thing for me has been the opportunity to work at something that I love and the knowledge that my passion has helped thousands of people hear and understand the spoken word better than before I attended that first of many SynAudCon classes.

“So thank you Don and Carolyn Davis and Pat and Brenda Brown. You have made such a huge difference in my life, and I really believe that through me and thousands of other students you have made the world a better place.”