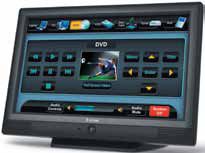 Touchpanels Continue to Respond to Consumer Trends and New Technology

As a fundamental component at the heart of any installation, the touchpanel is ever-evolving to keep a leg up on both the competition and the growing demands of systems integrators. Some of the latest touchpanel displays feature WiFi, larger screens, high definition viewing capability, sleek mounting capabilities, and some even have mobile device compatibility, so your iPhone or iPad can double as a touchscreen. Here are just a few of the latest touchpanels on the market.

These fully configurable 10-inch touchpanels feature thin bezels for a sleek, contemporary look. The TL P 1000MV and TL P 1000TV feature a 1024x600 resolution screen surface. They incorporate an MTP-twisted pair receiver, which accepts either S-video or composite video input over standard Cat-5 cable. Power over ethernet eliminates the need for a local power supply. The TL P 1000MV mounts on a wall, lectern, or other flat surface, while the TL P 1000TV sits on a tabletop or VESA standard mount with an optional adapter.

As the latest edition to AMX’s Modero Touch Panel line, the MVP-9000i features wireless and wired functionality, snazzy user interface capabilities like gestures and page transitions, nine-inch widescreen 24-bit color display, and built-in 802.11a/b/g WiFi card with antenna diversity. The need to pull a separate power cable for the docking station is eliminated by support for power over ethernet. Other features target next-generation conference rooms, including VoIP, 85-degree wide-angle viewing in all directions, built-in speaker and microphone, USB stick, and micro-SD slots, as well as an LE D-backlit display for energy efficiency.

The TS7 controls all g! and subsystem features with a 7-inch display. The Elan touchscreen features live, full-screen analog video for security cameras and TV preview. Six pushbuttons are available for commonly used functions, and an integrated microphone and speaker serve as convenient messaging features. The TS7 comes with brackets and backboxes for new construction and “dog ears” for retrofit installations.

The NXT series color touchscreens have an integrated control system. They are available in 3.5 inches, 4.7 inches, and 7 inches, with or without a video preview. The controllers are now available with white and silver aluminium bezels in addition to the existing black.

As the latest addition to the Core 3 family of OS-ready touchpanels, Crestron’s TPMC-9L features a nine-inch widescreen and a larger display, yet it has a minimalist design. The touchscreen offers widgets and high-definition video streaming for IP/web security cameras. Cover flow and page flips are two of the graphical, animated features. Finger-swipe control is enabled by gesture navigation with intelligent velocity. Pushbuttons are positioned along both edges of the screen, aligning screen text and graphics to the corresponding buttons. The TPMC-9L mounts flush into walls, lecterns, podiums, and equipment racks.

Along with Blackman Design Group, BitWise has released the 3.0 version of the Project Editor graphical user interface for iPhone, iPad, and iTouch. BitWise is working on an Android version and hopes to release that later this year. The application can be customized for different users’ devices and is retrofit-friendly. Network connectivity allows systems to scale to client needs. It adds on to existing systems and an RF remote solutions for a much lower cost.

The SmartPanel LC D touchpanels from Xantech offer zone control via RS-422/232, IR , GPIO trigger, and IP. The unites range in seize from 3.5 inches to seven inches with brigh, high resolution, professional-grade TFT LC D displays. The 4.3 inch and 7.0 inch models use widescreen displays. The SP43 and SP70 feature hard buttons for commonly used controls. These touchpanels can be used separately as a controller for an entire commercial system or combined an amplifier/ controller.

These Windows-based touchpanel controllers feature built-in WiFi and Bluetooth, a five-wire resisteive touchscreen, and a fanless cooling system. They include RS232/485 ports and are available as a widescreen 10.2-inch desktop model or widescreen 10.2-inch in-wall version.

Savant Systems’ TrueImage Control is a user interface solution that uses capacitive glass technology and is available in Savant’s line of ROSIE In-Wall and Tabletop Touch Panels providing iPhonelike GestureTouch navigation. Savant’s TrueImage technology gives you fingertip control via a simple tap on a wide-angle image of each room.

The TKP-2000 is an in-wall color touchscreen that is native to the network in that it does not require a black box to connect to Wi-Fi. With a permanent connection to your client’s network, the TKP-2000 is always ready with real-time information about their environment. The TKP-2000 facilitates quick setup of two-way devices via dragand- drop preprogrammed modules, for quicker remote setup.