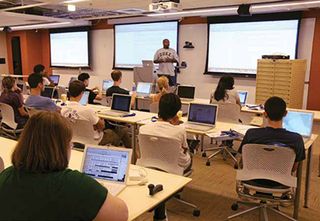 It seems that every classroom must be able to record multiple streams of HD content, and must be ready to become part of the MOOC (Massive Open Online Course) tidal wave led by Coursera, Udacity, Edx, and even Google Hangout. No doubt you’ve seen the new 80-inch Sharp LED backlit TV in your local big-box store and started thinking about integrating it into your next installation. You’re not the only one thinking about it— so are the studios and exhibitors who are trying to figure out how to keep you coming to theaters when you can rent Blu-ray movies from 31,500 Redbox locations or stream them to the TV, an Xbox, laptop, or iPad from Amazon, iTunes, Netflix, and watch them from your La-Z-Boy.

It’s not just the convenience of on-demand and free popcorn that make home viewing desirable, it’s also the stunning image quality that these new LED displays provide and the speed at which first-run movies become available. This summer’s The Avengers was released on May 4 and became available for rent or download on September 25, 144 days from the big screen to your iPad. The Dark Knight Rises lasted 137 days, and Arbitrage was available in only 98 days. Three months seems to be the line in the sand ever since the Cinemark chain boycotted Universal when it announced it would release Tower Heist two weeks after its theatrical release date in 2011.

Commercial theaters have 2K or 4K projectors (and 3D), not to mention professional sound systems, proper seating, acoustics, and lighting. They also involve driving, parking, ticket lines, six-dollar sodas, sticky floors, and that dude that won’t stop checking his smartphone. And as far as concerts go there’s nothing like a live show, but if you’ve seen the Adele Live At The Royal Albert Hall Blu-ray, it’s hard to imagine seats that would give you such great sound, sightlines, and close ups. On an 80-inch display with 7.1 surround, it’s spectacular.

Of 40,000 first-run theaters in the U.S., roughly 30,000 now have digital cinema capability, so the migration is nearly over. Digital cinema projectors differ significantly from pro AV projectors not only because they are usually bigger, brighter, and higher-res, but because they must adhere to the Digital Cinema Initiative (DCI), a performance specification hammered out by Disney, Fox, Paramount, Sony Pictures, Universal, and Warner Bros.

To conform to the DCI and reduce digital piracy, studios have designed an encryption scheme called key delivery message (KDM) into their content. The KDM must be entered into the digital projector’s media block in order for content to play. A 100mbps internet connection is required if direct DCI-compliant download of first-run digital content is desired, or releases can be delivered to the exhibitor via FedEx on removable hard drives. Either way, a reliable internet connection is required to poll security and performance logs for reconciliation with studio booking reports. So, even $100,000 commercial theater projectors are now network appliances.

Our time-shifting/streaming culture and the disappearance of local media playback devices is fueling a much hastier migration of pro AV to the network than
we imagined five years ago, presenting challenges and opportunities that are, on the whole, great news for the prepared professional. A similar shift has occurred in education with Scale-Up classrooms and the prodigious appearance of codecs, digital production switchers, streaming encoders, AV bridges, and the like in lecture halls and auditoria. In one of my recent classroom projects, the IT spec called for no less than 12 AV -dedicated data drops, three configured for high-bandwidth streaming. It seems that every classroom must be able to record multiple streams of HD content, and must be ready to become part of the MOO C (Massive Open Online Course) tidal wave led by Coursera, Udacity, Edx, and even Google Hangout. On the day-one launch as a Coursera origination site, 80,000 participants logged in to that one classroom.

It’s not just old-fashioned internet collaboration and distance learning driving the trend. Check out “Flip Teaching”, a methodology where students spend the bulk of their time studying independently via online tutorials and video, and the live class is used to assess comprehension, zeroing in on collective weak points, and testing. The theory is that flipping allows learning efficiencies not achievable in the traditional lecture/study/ exam pedagogy. Our timeshifting/ streaming culture and the disappearance of local media playback devices is fueling a much hastier migration of pro AV to the network than we imagined five years ago, presenting challenges and opportunities that are, on the whole, great news for the prepared professional. And the old barriers to AV content delivery on the network are evaporating rapidly thanks in part to AVB (Audio Video Bridging), the first IEEE 802.1 sanctioned suite of standards to accommodate the pro AV world’s needs in a manner that IT managers can unreservedly adopt.

Lastly, CTS-D, DMC-E, XTP-E, and ACE may be the pro AV certifications de riguer, but BICSI’s RCDD, Cisco’s CCT, CCIE, CCDE, and Microsoft’s MCSE and MCSM are the certs of the future for our industry. Whether InfoComm or AV manufacturers create new niche-y certifications to address the brave new world is almost irrelevant now that we are going to be living and working with ethernet routers, fiber backbones, and cloud-based AV applications.

In any case, pass the popcorn, this is getting interesting!