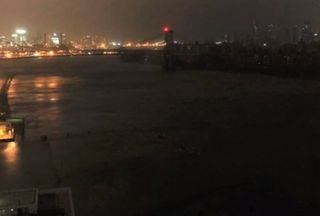 As electricity and communications are restored to expanding regions of the New York metro area, members of the AV industry are checking in with one another and offering help to those in need. Contingency plans in place since Hurricane Sandy have allowed many companies to continue business as usual, but news is spreading of companies entirely wiped out by floods. Meanwhile, the personal toll is only beginning to become apparent as the strife related to recovery from the devastating storm affects morale.

The national footprint of companies headquartered in states affected by the storm has slowed business as communications were reduced to text messages and social media platforms. But for many whose clients are dependent upon functioning audiovisual systems, the storm provided proof of a job well done.

"If you're watching news briefings on television, you're watching audiovisual at work," noted Steve Emspak, partner with Shen Milsom & Wilke in New York City. "Those briefings take place in audiovisual-specific rooms that allow first-responders to do their work. It's happening from North Carolina to Maine."

SM&W's design for the New York City Office of Emergency Management (OEM) provided the backbone for announcements and updates before, during, and after the storm surge swept across the area. Similarly, updates delivered from the New Jersey State Emergency Operations Center were a reflection of the other, behind-the-scenes technologies that were informing those missives.

In what Emspak observed was a double-edged sword resulting from Sandy's impact, calls for updates and improvements to AV systems started coming in immediately following the storm. Meanwhile, many at SM&W were personally affected by the disaster, with some losing their homes. "It's a tragedy," Emspak said. "The SM&W family has experienced a tremendous loss, in some cases with property that cannot be recovered. And many will be without power for weeks. But as a firm, we're back doing business as usual, as best we can."

In Hanover, New Jersey, David Schwartz of Essential Communications said a retail client of his will have to delay the opening of a flagship store in Rockefeller Center. Delivery of product for the install was delayed when trucks were unwilling to travel from JFK into the traffic-snarled city with limited fuel options. Schwartz also received calls from the SoHo Grand Hotel, which was experiencing ground issues due to generators.

"No matter what, at the end of the day, we're all dependent on copper. You can have wireless this and that, but somewhere, someplace, it all attaches to copper. And if the copper goes, so does everything else," Schwartz said.

Further north, in Rockleigh, New Jersey, Crestron "received an outpouring of calls and emails from our industry friends and colleagues checking in to make sure we are alright," said Sean Goldstein, vice president of marketing. "We are so grateful for the assistance and support we received over the past week. We are fortunate that the storm had minimal effects on our business."

Any Crestron facility that lost power during Hurricane Sandy was up and running again within a day of the storm via generators. Before the storm hit, Crestron took the threat seriously. "The safety of our employees is our first priority," Goldstein said. "We initiated our emergency plan to ensure the safety of our employees and reduce the impact of service and support disruptions to our customers during this time. We made arrangements for service and support calls to be routed to other regional offices so our employees in New York and New Jersey could go home to be with their families. All hands were on deck and our regional offices continued to provide the highest degree of support to our customers, without interruption."

Many expected work to get back to normal this week, with some deadlines most likely pushed out to accommodate storm-related delays. Glenn Polly of Videosonic Systems reported that most of his New York City personnel was able to get to job sites by last Thursday. While maintaining contact with clients throughout the incident to make sure everyone was alright, he anticipated new business from clients who were considering updates and even relocation in the case of one customer with a headquarters in a flood zone in lower Manhattan.

Chris Neto of AV Helpdesk was on site with a client last week, assisting in rescheduling meetings and conference calls. He described a scene rife with tables and chairs scattered to accommodate personnel from other offices. Those who could not make it in were working from home. "From a corporate perspective there is a big disruption," he observed. "Half the people that would have been here are working from home. Its really disruptive but business will go on.

*Lindsey Adler contributed to this report.