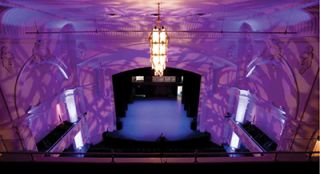 As the line between information technology and audiovisual technology continues to blur, in-house managers find themselves responsible for a wide assortment of both AV and IT-related systems. The common factor, of course, is the network. Increasingly, audio (and video) is being handled on networks, just like any other kind of data. But sound is a different kind of data, with different factors affecting the ultimate quality experienced by the end-user. When it comes to sound reinforcement systems, the role of the technology manager will vary depending on their own technical background, and how the sound is delivered for a particular application.

The job of a sound reinforcement system is very simple—to make sound louder. Every system begins with a sound source, which is either acoustic or electronic. Sound from acoustic sources, like voices or musical instruments, is picked up by one or more microphones, although electronic musical instruments or CD players (for example) may connect directly to the audio system. Other common electronic sources include pre-programmed emergency messaging, audio for digital signage, and background/foreground music.

Regardless of the source type, the sound level needs to be controlled and delivered to a specific area or group of listeners. Control is usually accomplished by some type of mixer that combines multiple sound sources, and allows the system operator to balance levels and adjust the sound quality through equalization and other types of signal processing. Delivering sound to desired locations requires routing (or zoning) capability, and actual sound coverage of an area depends on the loudspeaker system design and the type of loudspeaker and their physical locations in the layout.

To Network or Not to Network

Over the last 20 years or so, network delivery has become an increasingly common way of getting sound from the source to the loudspeaker. At the same time, there are many simpler applications where network capability is not necessary. There are three general types of delivery methods which affect the level of involvement by the technology manager:

1. Non-network, standalone systems. Portable sound systems for events at temporary locations are a good example these systems. Also, many installed sound reinforcement systems in auditoria, performing spaces, lecture halls remain unattached to a network. For these systems, the tech manager is usually responsible for procuring equipment, training staff to use it, and allocating the gear when and where it’s required.

2. Audio is delivered on a separate dedicated audio network. For nearly 20 years, dedicated digital audio networks have been common in large commercial spaces like airports, hotels, and convention centers. These types of systems require a bit more IT involvement and knowledge, since many fundamental concepts (like bandwidth, latency, data compression, etc.) play a role of the quality of signal delivery.

3. Network delivery, but audio is shared with data network. In this scenario audio may use the same infrastructure as the organization’s data network, although audio data may be delivered on a dedicated VLAN. A close working relationship between AV and IT departments—if not an outright merger between them—may be the best recipe for success in this case.

It’s All About Your Roots

For any type of system, it helps to have some level of expertise in professional or commercial sound. It’s fairly common for many technology managers to have experience designing, installing, and operating sound systems. It also help to have some knowledge of acoustics and how sound systems behave in different types of rooms.

Jesse Anderson, Audio-Visual Services Director for College of the Holy Cross in Worcester, MA, has a lot of experience with live sound, and agrees that this has helped him in his job. “I’m actually a bit of both an IT person and an AV person,” he says. “I was doing ‘multimedia’ shows when that meant ‘way too many slide projectors,’ and have over 20 years of live front-of-house sound experience. And I have also managed the networks and servers for a museum. The breadth of experience has me well positioned for the current convergence of all things AV onto the network.”

Since network delivery has become increasingly common, some knowledge of basic networking concepts is essential for tech managers and their staff. Anderson’s experience in both worlds may be a prescription for success as a tech manager involved with sound reinforcement systems.

Today, large permanently installed sound reinforcement systems are likely to be delivery on a digital audio network using protocols such as CobraNet, Dante, or new technologies like AVB (audio video bridging). These delivery methods share many common features with ordinary data networks, but many technology managers prefer to keep data and audio networks separate. Even so, the benefits of audio networking are pretty compelling for most managers.

“We have a series of dedicated VLANs on the corporate network, one for control, several for CobraNet, and one for AVB,” says Jesse Anderson, Audio-Visual Services Director for College of the Holy Cross in Worcester, MA. “The cabling and hardware is shared, but routing rules keep our audio traffic off of the main campus network. Authorized users can route to the control network. I wouldn’t choose to use it as a primary control surface, but being able to remotely adjust a microphone level from my phone has been an amazing addition.”

The variety of types of sound reinforcement systems on a corporate or university campus can be staggering. “At Holy Cross, there are a well over one hundred installed sound systems on campus including meeting rooms, lecture halls, auditoria, theaters, movie theaters, athletic venues, chapels, classrooms, seminar rooms and a radio station,” says Anderson. Different levels of expertise are required depending on the job, but it’s the technology manager’s responsibility to decide when to use internal resources or bring in outside help. “For most of the larger fixed-installation venues on campus, my department oversees the installation, maintenance and training for the venues, but operation is by staff from other areas,” says Anderson. “The same is true of our academic classrooms, though we will operate equipment in them for faculty for special events.”

But for the really large-scale events, (for example, commencement, concerts, etc.), tech managers often look to professional sound companies to handle the job. “My department usually acts as the go-between, translating the requesting department’s requirements into the actual order,” he says.

Sound reinforcement at the University of Ottawa is handled much the same way. Mark Gareau, who is the university’s Director of Multimedia Distribution Services says, “We have a combination of portable loudspeakers and mixers that we move around the campus for events, and installed sound reinforcement in meeting rooms, lecture halls, auditoria, and sports facilities.”

Gareau—whose background is also more audio than IT—says that he’s personally involved with all of the sound reinforcement systems on campus, especially making the purchase decisions as their needs expand. He says that they have standardized on a number of systems and components, and they rely on well-known brands for the most of their sound reinforcement installations. “Some of the systems are professional grade Meyer Sound loudspeakers, but for the most part it’s the conventional speakers, including Extron loudspeakers in the boardrooms,” he says. As the director of the group, Gareau’s mostly involved with making the purchase decision for what products they need, and allocating staff resources to setup and operate the gear.

Gareau says the university is not currently running audio for sound reinforcement over networks, but other types of AV content such as streaming, lecture capture, and digital signage are handled over a dedicated VLAN.

Following a nine-month, $10.5 million renovation project, the Civic Theatre, the oldest surviving theatre building in New Orleans, LA, has officially reopened its doors after sitting dormant for more than three decades. To bring the 107-year-old, 15,000-square-foot performance venue up to today’s production standards, Solomon Group, an L-ACOUSTICS Certified Provider for install and rental markets, specified and integrated a KIVA-KILO loudspeaker system into the space.

Jason Martin, Technical Services Group (TSG), operates the Lectrosonics system at St. Jude the Apostle Catholic Church. In the fall of 2009, St. Jude the Apostle Catholic Church embarked on an ambitious campaign “To Build a Future of Hope!” Among its various directives was the complete renovation of the church. Recognizing the importance of delivering a high level of speech intelligibility and music reproduction to the congregation, the church recently completed installation of a new sound reinforcement system—and at the heart of that system is audio processing and wireless microphone technology from New Mexico-based Lectrosonics. Highlights include the Lectrosonics Venue modular receiver mainframe stocked with five VRS receiver modules, along with two HH handheld transmitters, five LMa beltpack transmitters, plus two M152/5P lavaliere microphones and two SNA600 adjustable dipole antennas. To ensure optimized signal management, the TSG team also equipped the church with a Lectrosonics Aspen SPN1624 (16 input / 24 output) audio processor that was augmented by an SPN16i 16-input expansion unit.

How to Guarantee Speech Intelligibility in Your Facility

Speech intelligibility refers to the ability of a listener to understand the spoken word of a talker (assuming there is no language issue or physical speech disorder). With sound reinforcement systems, achieving good speech intelligibility can be quite complicated by three factors: 1) room acoustics, 2) the sound system itself, and 3) the interaction of the two.

Every surface in a room—floors, walls, ceiling and any furnishing within the space—will reflect or absorb sound, each at different, but measurable, rates. A room in which sound energy is reflected from many surfaces is known as a reverberant space, and is detrimental to understanding speech in that space. When many of the surfaces absorb sound, we call it a “dead” space. While a dead space does not negatively impact speech intelligibility, it can reduce the “naturalness” of the sound and its ability to project throughout a listening area.

The best way to avoid destroying speech intelligibility in a reverberant space is to try to contain the sound energy only to where the listeners are. Sounds simple—except that not all loudspeakers control directivity equally. Even loudspeakers with relatively controlled and well-defined coverage patterns will radiate sound off-axis, and it doesn’t care if there is a reflective or absorptive surface on the outer fringes of the coverage pattern.