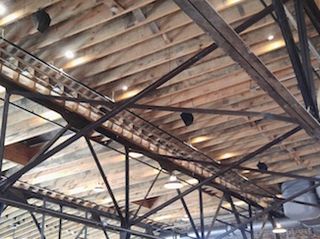 NEXO system in the rafters of Stage Sound

Stage Sound of Roanoke, VA recently installed the first NEXO ID24 System in North America at The Mill & Mine in Knoxville, TN. A multi-purpose event space and concert venue, the venue can accommodate 1,200, and was most recently used as one of the main sites for Knoxville’s Big Ears Music Festival, as well as an acoustic concert by Pat Benatar.

The physical characteristics of the ID loudspeaker cabinets are compact and low profile, enabling use in architecturally challenging spaces. “The NEXO ID Series is ceiling mounted and used to cover the venue’s mezzanine zone, supplementing the venue’s NEXO GEO S12 line array system,” stated Reid Henion, president of Stage Sound. “The NEXO brand is very rider friendly, and since we have used the GEO S12s on several successful design/build projects, we have confidence in their sonic quality, output, longevity, and value.”

The system configuration consists of five NEXO GEO S1210s flown per side for main arrays, two NEXO PS10-R2s for center fills, two NEXO GEO S1230s flown mid-house for delay speakers, six RS18 Ray Subs, and five ID 24s for mezzanine fills. Two NX4x4 and one 4x1 amplifier power the system. “I like the fact that the critical processing is factory-set and is integral to the power amps, making the system inherently tamper-proof,” said Henion.

“Using NS-1, the NEXO modeling program, we could clearly achieve very smooth coverage with this combination of components,” Henion continued. “The speakers were easy to rig and light enough to use without having to reinforce the structure from which they are flown, and the subs fit well into the spaces the owners of The Mill & Mine had allotted for them.”

The NEXO ID24s are flown above the front of house mix position, and Henion said he likes having a dipole speaker he could mount vertically to keep from sending unwanted mid-range energy downward toward the engineers’ ears. “The system voicing was very similar between the IDs and the GEOs. This made overall system tuning much faster and easier.”

Henion said the ability to achieve asymmetrical horizontal coverage using the CD flanges on only one side of the 1210s was helpful in covering the center of the room without hitting the brick side walls.

“The NEXO system Stage Sound installed exceeds our expectations for the space,” said Mark Heinz, architect for the project and owner of the establishment. “Our goal at The Mill & Mine was to create a dual function venue: a concert venue, and an urban building to hold private events. The powerful system helps balance the need for commanding music but allows the delay speakers throughout the hall to be discreet when necessary, for example, during a wedding ceremony.”

Stage Sound also installed a Yamaha CL5 at front of house with two Rio 3224-D input/output racks and a PM5D-RH for monitors. The house console connects to the rig via Dante to the main Symetrix processor. Analog and AES connectivity are positioned at key locations for guest consoles. Dante connectivity is widely distributed so the monitor rig can go on either side of the stage and the house desk can go to any of three mix positions.