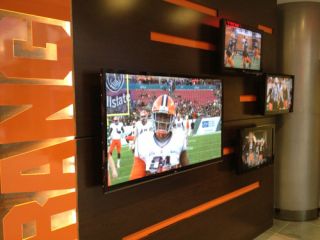 As part of the project, VIZIONefx installed 10 flat-panel displays, as part of its CAMPUSefx platform, to be used as video footage stations. In addition, two individual VZN Touch kiosks were installed - one for a historical tribute to the #44, Syracuse Football’s iconic jersey number, and a second to highlight the players who have gone on to compete in the National Football League (NFL). CAMPUSefx is a broadcast channel designed to distribute media content to television displays. In utilizing CAMPUSefx, televisions and displays become information-delivery vehicles for content and messaging. VZN Touch creates a dynamic engagement kiosk to interact with student-athletes, alumni, fans and visitors. Utilizing an HD touch screen display, VZN Touch allows users to navigate a direct portal to video clips, schedules, events, highlights, seating charts, wayfinding and historical information.

“VIZIONefx has provided technology which will engage everyone who passes through the Iocolano-Petty Football Wing,” said Kevin Van Derzee, Director of Football Operations. “Our partnership with VIZIONefx will help in the engagement of future student-athletes, alumni, and fans as we continue on the path toward becoming one of the nation's top programs."

"The Iocolano-Petty Football Wing Football Wing is extremely important
to the culture surrounding our program," said Bob Brotzki, Assistant
Athletics Director for Player Development. "The enhancements VIZIONefx made to this space draw people in immediately upon entering the building and leave a lasting impression. This will go a long way to assisting in attracting the very best student-athletes to the Syracuse University Football program."

This installation is now the sixth project VIZIONefx has completed with Syracuse Athletics. It has provided both an Information Broadcast Channel and an Interactive Touch Screen kiosk within the Stevenson Educational Center and installed Digital Menu Boards, a Ticket Window Information Display and Advertising Displays at ATMs within the Carrier Dome.