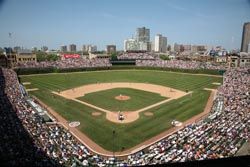 The new audio system, which is being implemented in phases, is based around Community R-series loudspeakers. "We completed Phase One in February of 2006," said Tucker, "concurrent with the expansion of the bleachers and the addition of a restaurant in the enclosed Batter's Eye Lounge."

Working around the additional constraints of the inevitable Chicago winter, Tucker has recently completed Phase Two of the sound system, comprising 27 Community R.5-HP loudspeakers to cover the lower seating around the bowl. Seven R.5-99 speakers provide additional coverage to the side areas. "The R-Series provides excellent coverage and intelligibility," Tucker observed. "And it's probably the only speaker out there that can withstand the brutal Chicago weather. All my experience with Community speakers has been really great."