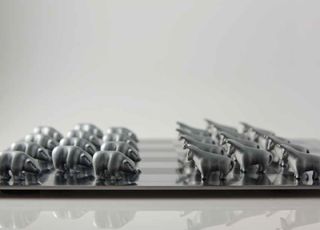 With the big, publicly traded IT corporations eyeing the AV business as the two industries continue to converge, audiovisual design build firms and systems integrators, which are still largely privately held, may view the competition with some trepidation.

Yet, like David versus Goliath, AV companies still have an edge.

Westbury National Show Systems competes with two big public telcos in Canada, according to Brock McGinnis, systems division sales manager. One of them, Telus, acquired Adcom, an AV integrator and videoconferencing specialist, which competes with Westbury as a vendor on standing offer business (the Canadian equivalent of GSA) and on public sector—education, healthcare, and judicial—projects.

“They are very difficult to compete with because they don’t need to assess the value of any given project or contract on its merits,” said McGinnis. “They appear to pursue specific contracts on a strategic rather than a tactical level. Because their revenue is in the billions, the difference between them charging a university $2.5 million or $2 million is a rounding error in the grand scheme of things.”

Strategically, Adcom might want to be responsible for all of the devices on a client’s network. “When it comes to Cisco or Polycom infrastructure and endpoint, we can’t begin to compete with them,” said McGinnis.

Typically, these public entities can easily scale their customer base, he continued. “They’ve got these great big administrative systems; it doesn’t matter to them if they have 50 new clients, because their customer service infrastructure is already there. Whereas for a $35 million company like Westbury, we pick up a [major] client and we have to add three people in order to administer it.”

But according to Michael MacDonald, president of ATK Audiotek, who has years of experience working in-house and consulting with various public companies, “The overhead structure is much more lean in small companies. The upside of the small company is agility; it’s easy to make decisions fast.”

On the other hand, as a big public company, he said, “You don’t have to worry about cash flow. If you want to test something out you can entice management to experiment and learn about the market. But the downside to big corporations is that, because the overhead is high, there is very natural, organic margin pressure to charge more for the same kind of work.”

It’s therefore easier for private companies to underbid a job, he said, because analysts are not going to want to hear at the next quarterly earnings call that a public company’s new enterprise is making less than its average profit margin: “If it’s dilutive then the analysts will actually ding you for that.”

That said, “Big companies do, from time to time, say, ‘We’re going to develop this new vertical market and we’re going to have a lower margin for a while to get in the game and buy a few jobs.’ But you cannot do it for any substantial length of time,” said MacDonald.

Unlike small private companies, larger entities certainly have the ability to sweeten a deal. “I’ve seen crazy things,” said Paul Freudenberg, who has worked for both public and private companies and recently signed on as general manager for Rat Sound Systems. “One of the video display companies fell over themselves to get a display into a new sports arena. It wasn’t about the quality of the display, or the resolution, or the relationship between the installer and the vendor. They knew they were going to have tens of thousands of eyes on the screens every night. The screen and the sound system were given away for perpetual advertising rights on that screen; it just got written off to marketing as an expense.”

Yet private companies may have an edge. “In the end, people buy from people, and they buy on reputation,” noted McGinnis. “In some cases, my people and I may have a better relationship with the client, or the ability to convey that we can be a better strategic business partner for them, because we know an awful lot more about AV than their telephone rep.”

The flipside, said McGinnis, is that a public company typically has dedicated sales reps embedded with its major customers. “As a result, they have relationships with people that I will never touch.”

But the big public IT companies typically do not have the technical expertise or the passion of smaller AV operations, McGinnis observed. “A large bank with 7,000 outlets in Canada wants to deal with someone like the telephone company—we get that. But a law firm or an accounting firm with 10 or 20 offices, they want the level of technical expertise that we offer, as opposed to the response times that the large public companies can offer.”

From the public company’s perspective, said MacDonald, “The challenge is that there are no orange trucks with ladders on the top that say Harman or Cisco on the side. What they do is figure out how to manage the project, the design, and the contract with the client, then utilize an integrator as a sub-contractor.”

Freudenberg agreed: “These big publicly traded IT companies lack the expertise in audio, video, and control, maybe even lighting. The irony is that you can lose to the IT company then they end up hiring you to do the exact same thing you were going to do.”

“We physically carry things in the door, plug a bunch of stuff in, tack stuff to the walls and the ceilings, pull some cables through conduit, and then we make it all work together,” said McGinnis. “The IT industry doesn’t do that; they sit in the dark in front of a screen and make it all work, and when there’s a problem they query a device. If they can’t query it, it means it must be a power supply or a power problem, which becomes somebody else’s problem.