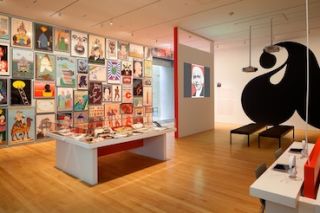 The CBS television affiliate in Philadelphia named the show one of the top Museum Exhibitions to look forward to in 2013.

“Double Portrait,” which runs through mid-April, is the first joint exhibition by the husband and wife designers. It showcases Chwast’s iconic works, including his famed anti-Vietnam War poster “End Bad Breath,” and other work inspired by German Expressionist woodcuts, Victorian typography, children’s art, primitive and folk art, and comics. By contrast, Scher is best known for her reimagining of typography in the fields of graphic identity and environmental graphics; among her works in the show is the poster for the play “Bring in ‘da Noise, Bring in ‘da Funk,” whose typographic rhythms reflect the production’s dynamic dancing.

The Philiadelphia Museum of Art already has Alcorn McBride gear running other exhibits. Two Alcorn McBride’s DVM-8400HD’s run the slide shows which are at the heart of “Double Portrait.”

“Paula Scher and Seymour Chwast have produced an immense and varied body of distinguished work over the years,” said Kathryn Bloom Hiesinger, Ph.D., The J.Mahlon Buck, Jr. Family Senior Curator of European Decorative Arts after 1700 at the Philadelphia Museum of Art. “It is only through these slides that visitors to the exhibition can see and understand the full range of their work.”

Alcorn McBride’s Digital Video Machine is a studio quality MPEG-2 player with all the interfaces AV contractors need for professional installations. The DVM-8400HD stores video on CompactFlash cards, so playback is virtually instantaneous. Clips may be triggered via external contacts or pushbuttons, serial RS-232 messages, Ethernet, playlists or the built-in realtime scheduler. The unit can also simply loop continuously when powered.