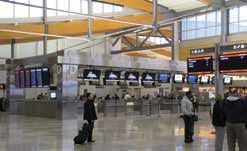 With more than 10 million passengers traveling through its gates in 2007, Raleigh-Durham International Airport (RDU) needed communication tools capable of constant use.

From advertising to flight information display systems (FIDS), RDU had an extensive list of requirements for its 5000-acre property that it wanted to solve via the use of digital signage. Additionally, its desire to standardize on displays across all areas of the airport meant that RDU needed a manufacturer capable of providing a broad offering of products at an affordable price. The goal in this process was to standardize the displays and rid RDU of the multiple display brands being used.

The intended use for the digital signage network was for RDU to uniform its signage to easily communicate messages and advertising throughout such a large space. With a new advertising contract, RDU also wanted to offer its clients the ability to advertise with vibrant, active signage, which would benefit them as well. Ultimately, the signage was intended for the general population as they moved throughout the airport. Whether they would use the signage to check on flight times or entertainment, they were the audience being captivated by the messaging. All of the 390 displays in RDU are operated from one central location, which enables its Information Services team to centrally monitor and manage the health and status of each individual screen.

Being that all of the displays are in the NEC family, RDU operates all of the screens from a central location that was critical to the implementation success. The products are easy to use and integrate, which were also keys to installation success.