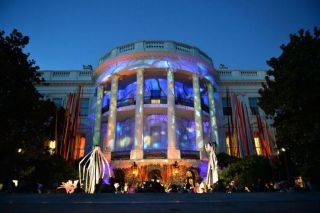 The first projection mapping at the White House was during Halloween with the Trick or Treat festivities“We do a good bit of work with UNCSA,” said TJ Donoghue, WorldStage project manager and one of two UNCSA alumni from WorldStage who took part in the show. “Norman Coates, director of lighting Design at the School of Design and Production and the founder of the Winston-Salem Light Project, called me and told me about this opportunity with the White House, so of course we jumped at the chance to be involved. It was great to work on this groundbreaking project with the UNCSA team of faculty, students, and alumni, and with event producers Jonathan Deull and Philip Solomon of Way2Much Entertainment.”

The Trick or Treat event began after school and continued until early evening. President Obama and First Lady Michelle Obama distributed treats as 85 costumed acrobats and entertainers transform the South Lawn into an Enchanted Forest. At night, the White House was illuminated with holiday-colored lights and gobos and a 4.5-minute video loop was mapped onto its columns and balcony of the South Portico.

The video, created by UNCSA alumni, consisted of graphical content that played in a loop until 11 p.m. and was visible to by-passers. Frankenstein-style electricity crawled up and down the portico’s columns as sparks made the columns appear to sway. A gigantic full moon rose and set; ghosts darted back and forth and huge black cats stalked the White House. Jack O’Lanterns piled up between the pillars, and skeletal bare trees were outlined against a purple landscape where bats flew and spooky eyes glowed. Even presidential dogs Bo and Sunny made an appearance before the orange, white and blue star-spangled ending.

“Everything went well and everyone was very appreciative of the lighting and projection mapping,” Donoghue said.

The team got a treat of their own when they had a brief opportunity to meet the President and First Lady before the event got underway.