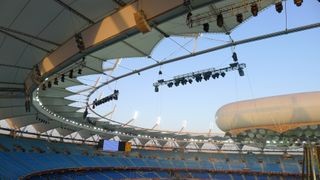 NEW DELHI, INDIA--With a 60,000-plus seating capacity, Jawaharlal Nehru Stadium in New Delhi, India is the biggest venue to be used for the October, 2010 XIX Commonwealth Games. The stadium is hosting athletics events and, most importantly, served as the venue for the Games’ opening and closing ceremonies.