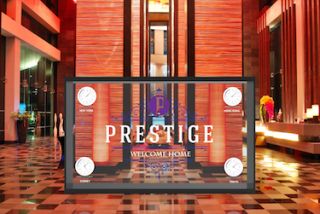 Organic Light Emitting Diode (OLED) technology removes the necessity for any backlight or enclosure, maximizing the impact of transparent displays. The virtually frameless display enables designers to overlay text, images, and video content onto objects set behind the glass display.

Organic Light Emitting Diode (OLED) technology removes the necessity for any backlight or enclosure, maximizing the impact of transparent displays. “This is a very exciting development in transparent display because it is an emissive display, meaning the pixels on the face of the screen itself light up,” explained Jennifer Davis, vice president of marketing and product strategy at Planar Systems.

LCD technology has dominated the transparent display space, but the need for a backlight or enclosure limits applications, according to Davis. “People really want that science-fiction effect of glass floating in space and having images or video show up as activated on that glass,” a promise that the LookThru OLED fulfills.

Planar introduced its first transparent display in the late 1990s, a history that has informed the company’s design of the LookThru OLED. The design team settled on a 55-inch model available in two configurations: tabletop or ceiling mounted, and flush mounted. A touch version using 32-point IR touch will be available at time of launch. Mass production is scheduled for February 2016, and Planar is accepting pre-orders now. The base model is priced at $14,995, with options to add on from there.

Planar introduced its first transparent display in the late 1990s, a history that has informed the company’s design of the LookThru OLED. Planar was actively seeking feedback from integrators and other partners in line with its preview at the ISE show. This feedback led directly to the choice of a 55-inch model, wide viewing angle with no off-axis contrast or brightness limitations, wide color gamut, and high-durability surface. The desire to tile the displays was also a key consideration, so the ability to add an image processing solution is available. For example, for a two-by-two configuration, integrators can put two LookThru OLEDs in tabletop mode, two in celling mount mode, and align them. Integrators also voiced the desire for a standard product with a consistent price point and not a custom solution. “The multiple mechanical options that we are offering I think really do address that, allowing [integrators] to do the range of things that they might want to do, and still be able to buy off our price list,” Davis said.

The other theme heard in the design process was for the display to work as similarly as possible to familiar display products and technology on the market, Davis explained. For example, both HDMI and DisplayPort inputs are standard. The display is controllable by RS-232. LAN, Crestron, and other control systems; it’s also compatible with PCs, players, and consumer video devices that rely on HDCP compliance. Processing solutions from Planar, like the Clarity Visual Control Station (VCS) are compatible.

Museum exhibits and other spaces where information and objects are displayed together are major markets for which Planar sees the most opportunity for its LookThru OLED displays.One design consideration integrators should keep in mind as they experiment with content is that black or dark content appears clear while content that is light, bright, highly saturated, or even white will appear to float on the screen opaquely.

Major markets for which Planar sees the most opportunity for the LookThru OLED are retail merchandising, museum exhibits, and any space where information and objects are displayed together, as well as hospitality, from hotel lobbies to restaurants and bars to corporate lobbies and experience centers.

Planar’s trademarked Extended Ruggedness and Optics (ERO) technology uses optically clear Corning Gorilla Glass bonded to the front surface of the display. Thus, the surface can handle rigorous environments. The combination of ERO and Gorilla Glass improve perceived contrast by more than 300 percent, compared to traditional large-format cover glass, according to the company.