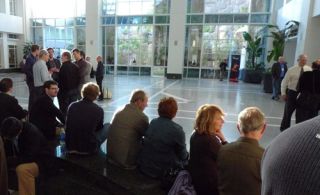 While digital cinema– the transition in commercial movie theaters from analog to digital– gets the most press and is indeed moving extremely quickly now, the cross-over to video projection for the rental and staging market is obvious. Not just for the technology bleed from one segment to the other, but on the business side there will be an increasing trend involving live events entertainment or education in large-screen venues. This was in ample evidence in Galveston, as a good percentage of the attendees were not commercial movie theater owners or operators but worked in the Museum or educational institution side of the market. Interestingly, while the Moody Gardens Digital Cinema Symposium was hosted and organized by Barco, registration was open to the industry, and in fact representatives from other providers (including Christie, Sony, NEC, Doremi, Qube, and more) were in attendance. This was telling of how far the industry has matured, and how confident the industry leaders are– and unafraid to mix it up in transparent and open conferences involving the trade as well as end users.

Barco first released its 4K DLP Cinema projector in 2010– but Barco is now exploring higher frame rates. The specification of 48fps in the DCI spec ushered in 3D. But further evolution of frame rates will see the ability to achieve 60, 96, and 120 fps performance– to be able to do 30fps, 48fps, and even 60fps 3D. And DLP technology– that Barco (as well as the other DLP Cinema licensees Christie and NEC) uses for its light engine– can more easily move to these faster frame rates– with a software upgrade– than can Sony’s SXRD technology.

We all learned years ago– in film school or in the field– that great audio can make the difference in the movie experience. And we attendees of this Digital Cinema Symposium were reminded today by Brian Claypool, Sr. Director, Strategic Business Development, Media and Entertainment, Barco, that in fact Barco got its start in audio– as the “Belgium American Audio Company”. And we experienced a very impressive demo Monday of the new Auro-3D system from Barco and Auro Technologies. Auro-3D is a sound system designed along three spatial axes (width, depth and height) rather than the two axes as found in traditional surround sound.

The full Auro-3D loudspeaker layout is defined for up to 13.1 channels, but 11.1 will be the more common format for movie theaters. Auro-3D technology is compatible with existing formats, standards and distribution mechanisms, so according to Barco, “only a minimal hardware and installation investment is required to upgrade from traditional 5.1 to the Auro-3D 11.1 audio format.”

In the demo at Moody Gardens, Barco played some custom-produced recordings of city streets in Brussels, Belgium, as well as clips from “Red Tails”, the new movie that will be released to theaters this month, that is produced by George Lucas and based on the Tuskegee Airmen, the group of African-American combat pilots during World War II. I can say that the only time I’ve ever heard such dynamic, three-dimensional sound was in a very custom (and expensive) demo in a Cirque Du Soleil theater in Las Vegas. The aural modeling achieved in the Barco demos Monday was awe-inspiring. The addition of the “height” channel that adds on a layer, and particularly the overhead channel really brings the audio to life.

Barco is trying– in competition with Dolby and a small group of other companies– to bring audio back into the movie theater experience in way that is as dramatic, and market-defining, as was the introduction of THX in movie theaters years ago. Auro-3D goes beyond Dolby’s previous 7.1DS format, and it does not use the rather complex and expensive “wave field synthesis” approach that IOSONO tried a few years back but alters the perception of spatial sound by adding multiple speakers in a hemispherical array. And key to this offering from Barco is that no extra distribution is needed from the studios. With Auro-3D, audio tracks can be created in the multiple source points originally, or upmixed from 5.1 to 11.1. But if a system is 5.1, it can extract just those tracks from 11.1 material. No need to release separate 5.1 and 11.1 material.

But certainly the most dramatic demo at the Digital Cinema Symposium was Barco’s showing of a prototype Laser projector. How many “prototype” demos have I seen, over the years, of new projection technology? Too many to count, and typically demos are done in smallish, darker-than-the-inside-of-a-cow rooms, and showing material that avoids things like skin tone. Not so this demo. I was very impressed. Although Todd Hoddick, Vice President Entertainment, North America, at Barco, prefaced the demo by asking the audience to bear with any glitches in the prototype demo, I can report that the admonition was totally unnecessary. The audience saw a stunning display on a massive screen (about 80 ft. wide at least), with a light output they have never seen anywhere. 600 watts of laser light into the 4K DLP (with a 1.38 inch chip), super high contrast, with amazingly uniform light output to the last inch of every corner of the screen. And although Hoddick explained that the “de-speckling” necessary for the laser-produced image still had a bit more to go in development (speckle is the introduction of image artifacts resulting from the interference of narrow bandwidth light), Barco did an amazing job of eliminating the speckle. Clips from “Pulse” (upcoming movie release from the producers of the Broadway hit “Stomp”) and from original 4K material shot with a Red 4K camera, projected onto the massive Harkness screen, were stunning. It’s impossible to describe the combined, synergistic effect of simultaneous very high light output (55K ANSI Lumens), higher contrast, and 4K resolution.

The benefits of Laser projection are easily listed:

• higher brightness (55K now, in this prototype– and in ANSI, not Center, Lumen measurement)

• unlimited dimming for 2D and 3D

• higher contrast, because of the more collimated light source

• no light fall-off in edges or corners of screen

The challenges yet to overcome for Laser: cost is still too high for significant penetration. Regulatory bodies have not signed off on the safety concerns– but there was general consensus in private conversations at the Symposium that this is largely due to bureaucratic delays with regulatory bodies many of which have regulations on their books that address 1960’s and 70’s technology– not today’s (and it’s important to note that state laws govern the use of lasers, so updating them will not be a quick of fluid process).