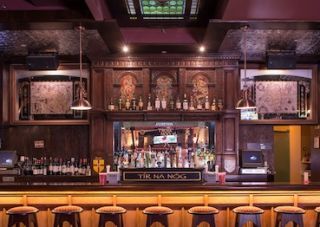 "The owner, Tony Colbert, owns several Irish pubs and takes immense pride in the design of each of them," said Rich Trombitas of Cornwall, NY-based Cardone, Soloman and Associates. "He imports woodwork that's been salvaged from churches built in Ireland in the 1700s and 1800s, then they design the individual detail to fit the space, and the woodwork is all done by master carpenters. The architecture and décor is simply magnificent - it all looks like it's been there for centuries."

Trombitas says the owner was adamant that equal attention be paid to the pub's audio system, which includes a cross-section of Renkus-Heinz TRX and CFX Series loudspeakers as well as PNX and BPS subwoofers. "Tony made it clear that he wanted more than just background music," he said. "He wanted a system that sounded consistently great no matter where you're sitting, and blended seamlessly with the design of the place."

The system, installed by veteran AV firm Starview Satellite of Rego Park, NY, is divided into numerous zones, with a primary focus on the main dining area and the pub's expansive and ornate bar, bridging the space from front to back. Sound to the main dining area is handled by eight TRX81 two-way 8-inch loudspeakers. A pair of PNX112 subwoofers recessed into the walls provides extra low end punch.

"The coverage of the TRX-Series aligns perfectly with what we needed to accomplish in this space," said Trombitas. "The rotatable horn enabled us to mount the units either vertically or horizontally, depending on what worked better in that particular space."

Ringing the dining area are individual booths, sporting massive 18-inch thick stone walls and burnt beams. "The design is an homage to Irish society at the height of the depression," Trombitas explains. "The upper class gentry and the peasants can see each other, but there's a space separating them."

CFX41 compact 4-inch two-way coaxial boxes are mounted over the booths for added reinforcement. "Their level is down pretty low, about 8dB lower than the mains, just to fill in the mids and highs when the place is crowded," Trombitas said.