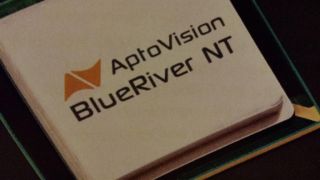 While we’re all aware of cool technology like HDBaseT for moving AV signals around over the network, there's a new kid in town. From a little known hotbed of innovation close to my heart, a Canadian based company has developed a chipset that is poised to shake up the AV distribution world. Rather than just attempt to make another version of something else already out there in the wild, AptoVision has found a way to completely change the premise of network based switching.

AptoVision has found a way to completely change the premise of network based switching.