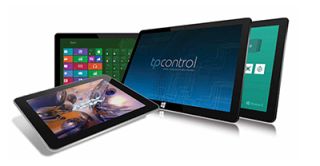 While they can’t do everything, a tablet or a phone should now be part of every AV manager’s toolkit.

With tablets and phones inexorably creeping into all aspects of business, it was just a matter of time before they started to be used to help set up and control AV equipment. Whether it’s turning the lights on and off, checking on a projector’s status or even playing a video on the big screen, tablets and phones are here to stay.

“While they can’t do everything, a tablet or a phone should now be part of every AV manager’s toolkit,” says Eric Neilson, senior product marketing manager at AMX’s Richardson, TX headquarters. “These devices can help get the image looking right and make sure the right slide is being shown.”

For instance, AMX’s TP Control software connects with the company’s Master Control infrastructure and allows you do to anything from dimming the lights before a presentation to remotely turning off the projector when the meeting is over. “TP Control lets you take command of your equipment,” added Neilson, “and is becoming very popular with corporations.”

TP Control is an offshoot of the company’s family of dedicated control panels that have touch-screens ranging from 4.3 to 20 inches. The TP Control phone-tablet software mirrors their operations. “The apps cover 98-percent of their abilities,” said Neilson. “The two complement each other.”

Another approach is to use Crestron’s Mobile Pro software on a tablet or phone. It allows AV managers to not only adjust the lights and turn AV equipment on and off, but examine its operations. It can even tell you that a projector’s lamp is nearing the end of its life. “It doesn’t replace the remote control, but puts a lot of power and intelligence in your hand,” said David Silberstein, director of commercial marketing at the Rockleigh, NJ-based Crestron.

The software is based on the company’s touchscreen control panels, and can communicate with devices in the same building, across a corporate campus or on the other side of the globe. The key is that once the gear is connected via Crestron’s Control System, it’s available to any device that has the MobilePro app installed.

“We use the Crestron Mobile Pro app on iPads to control the AV equipment in our conference rooms,” said Leonard Klein, the principal at Glumac, a Portland-based engineering firm that has nine worldwide offices that specialize in sustainable building projects. “It has blended into how we do business very quickly.”

Extron’s TouchLink for iPad app connects with and works off of the company’s TouchLink touch panels, which makes setting it up a one-click affair. The panels range from 3.5-inch displays that can be folded into a table niche to 10-inch panels that can be mounted on a wall.

TouchLink for iPad is available as an iOS app for iPads models, while Crestron’s Mobile Pro software also works with Android phones and tablets. AMX’s TP Control covers all the bases by adding the ability to control a room’s equipment with a Windows 8- or RT-based tablet. Or with any online computer for that matter with its new TP Cloud that routes commands through the Internet.

TouchLink for iPad does have a distinct advantage when it comes to economy, though. That’s because the TouchLink app costs only $4.99, much less than the others, potentially saving thousands of dollars across an organization. While Mobile Pro costs $99 per copy, AMX’s TP Control apps cost between $250 and $750, but can be purchased as a site license that lowers the per-user cost.

As anyone who’s wasted hours of otherwise useful and productive time playing the “Cut the Rope” game knows, the big advantage of phones and tablets is the display’s ability to interpret finger gestures, like swipes or multiple taps. This not only makes it more interactive and tactile, but it allows people to use the interface in the most instinctual, efficient and convenient way. For instance, when setting up a video conference call with Crestron’s Mobile Pro rather than tediously going through a list of contacts to invite one at a time, “you can swipe down the screen to fly through the list and get to where your recipient is,” added Silberstein. “It can save a lot of time and frustration.”

AMX’s TP Control solutions Some take this a step further with the ability to listen for voice instructions. Any of its commands— from turning the room’s projector on or off to telling it what to show—can be set up for voice command. Once done, all you do is tell the phone or tablet what you want it to do.

A phone or tablet can also come in handy when things aren’t exactly working the way they should be. For instance, Extron’s TouchLink for iPad can directly look inside a variety of equipment and grab detailed data, whether that is an errant IP address or a dirty dust filter.

Extron’s iGVE app takes this idea to a new level by going beyond monitoring the equipment in a single room. It can examine hardware and software across a building or campus, querying them for operational or maintenance snags before they become issues. This can make an AV manager’s job a lot simpler, but, it’s only available for iPhones and iPod touch devices.

A big consideration here is how the data and commands flow to and from the handheld device. The software and back-end control systems of all three systems are agnostic to how they are fed with data, so you can use a mobile data service or tap into the facilities WiFi. For most, WiFi can save a lot of money because there are no outside data service charges.

The Epson mobile app in action Either way, the action is surprisingly prompt. “We use 802.11n WiFi and the software’s response is so fast, that you don’t even notice it,” said Leonard Klein, the principal at Glumac, a Portland-based engineering firm that has nine worldwide offices that specialize in sustainable building projects. “There’s no delay.”

Some apps like AMX’s TP Control go beyond control to letting you show presentation slides. This allows executives to leave the clunky notebook on their desks. “The key is that you can walk into a boardroom, pull out your phone and start your presentation,” according to AMX’s Neilson. “It lets you be in command of everything.”

By contrast, Crestron’s Mobile Pro app is strictly about controlling AV gear and not presenting. To turn it into a presentation machine, you’ll need to install the company’s Air Media app, which can send what’s on the tablet’s screen to a projector or large monitor. There are versions for the iPad, iPhone as well as Android devices that are, happily, free.

It all comes together at Glumac in their new Spruce and Douglas Fir conference rooms, which are each equipped with a 70-inch LCD monitor and can be combined to create a large meeting space. With Air Media loaded on his iPhone, Klein puts it all on-screen. “I pull out my phone or iPad and pull the presentation right off of it,” he recalled.

It’s not likely that anytime soon, a phone or tablet app will put an end to the use of remote controls or dedicated touch panel control systems, but their use is becoming increasingly popular. “Because just about everyone carries at least one device that can connect with AV gear,” added Extron’s Joncas, “these apps have a bright future because they can do so much for so little.”

(Above) Crestron’s Mobile Pro and Extron’s TouchLink (below) and iGVE solutions offer flexible, mobile control for system monitoring and communication. Brian Nadel is a writer based in New York. He is a frequent contributor to AV Technology, Scholastic, and ComputerWorld.

Getting images and documents from a phone or tablet onto the big screen doesn’t require a building full of control infrastructure anymore. Epson’s iProjection app can put you in charge of the show.

The Epson app is a freebee that works with iOS and Android devices, so it should easily fit into the emerging BYOD work ethic. It can connect with more than 70 of Epson’s most recent network-aware projectors, but not those of competitors.

Getting started is quick and easy. After downloading and installing the iProjection app on your phone or slate, the system connects with the projector’s WiFi signal via its unique network name. Just select the projector from the software’s onscreen list of available machines. After that, all you need to do is pick the item you want to show to the group. In a second it’s on the big screen for all to see.

In addition to being able to change the source input or page orientation, the software can show Web pages, Office documents, Keynote presentations, Adobe Acrobat as well as the most popular image files. On the downside, it can’t display videos.

The best part is that once everything is on-screen, you can annotate it in a variety of colors by writing on the phone or tablet’s touchscreen with a finger or stylus. It can turn a boring slide show into an interactive experience.

Conference at Stanford Will Explore the Future of Internet-Delivered Media

Scheduled for June 17-18 at Stanford University near Palo Alto, California, the conference will explore the technology, creative, and business requirements for delivering a compelling, reliable entertainment experience over the Web.

Technology and creative experts will gather at the ETIA conference to explore the differences and commonalities between traditional media and media delivered over the Web, appreciating key attributes and predicting technical trends. Presentations will address topics ranging from the future role of OTT services, to the impact of technology on storytelling and on business models, the translation of “traditional” content to the Web, storytelling across devices, the state of sound and captioning on the Web, and the question of fast-lane Internet access.

“The ETIA conference not only offers engaging panel discussions and presentations, but also opens the door to a broader dialog—a conversation with the power to move the industry forward in addressing the new reality of Internet—delivered media and entertainment,” Joyce Farrell, executive director of SCIEN and ETIA conference chair, explained.