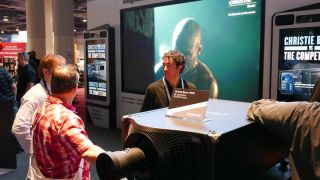 Making its North American debut at NAB this week was the Christie Boxer 4K30 and the Christie H-Series projector line. Delivering “unrivaled brightness for its size and weight,” according to Christie, the Boxer 4K30 is a projector designed for high-profile rental staging and large venue events. Weighing only 150 pounds, Christie Boxer is, said Christie, “the brightest, lightest, and smallest 30,000-lumen projector in its class.”

The Christie Boxer projector at the Christie booth at the NAB show Specs include: