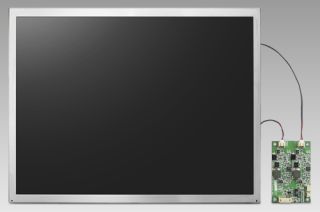 One major concern about high brightness is power consumption. Advantech is able to upgrade display brightness up to 1200-nit, with low power consumption, longer product life, and unchanged mechanical design. The Advantech IDK-2000 series uses a green LED light bar in place of CCFL as the backlight source. This, coupled with optical films, advanced reflection pattern design on light guide bottom, and special radiation technology enable 1200-nit with a low-power backlight source. Compared to traditional CCFL, LED backlight provides a mercury-free solution, better uniformity, and enhanced color contrast and saturation. The Advantech IDK-2000 series requires about 20% less energy than competing products with the same level of brightness. For example, a 17” LCD at 1000 nit usually consumes 35W while Advantech IDK-2000 series only consumes 29.47W, resulting in displays that run cooler with maximum reliability. In addition, the surface temperature of the LCD panel is below 40°C under turn-on conditions due to the low heating effect.