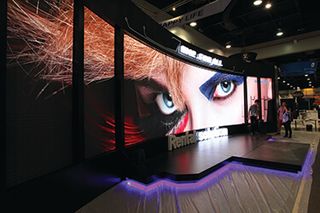 Doors opened last Tuesday on the largest InfoComm show to date, with more than 1,000 exhibitors and an anticipated crowd of 40,000 attendees—an affirmation that “the industry is alive and strong and well, and continuing to grow,” according to David Labuskes, CTS, RCDD, executive director and CEO of InfoComm International.

Things got underway with the Super Tuesday full-day classes and a keynote by Stephen Dubner of Freakonomics fame, who discussed the future of the industry and the role of AV in the evolution of global communications. Other highlights of the day included the Digital Signage Summit, which made its first appearance in the U.S.

As the heart of the show opens with the show floor, Labuskes was excited for guests to enjoy the wealth of improvements the organization has made to enhance the experience of attending the Western Hemisphere’s largest AV gathering, including increased shuttle bus service and better way-finding, as well as food trucks and an air conditioned beer garden.

“There’s hundreds of thousands of dollars being invested into the show this year—and into the attendees’ experience—to ensure that people leave having had the ‘exceptional experience’ that we keep talking about,” Labuskes said. “It’s an example of ‘walking the walk,’ not just ‘talking the talk.’”