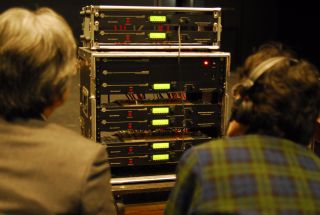 Receiver rack for a properly coordinated 40-channel wireless system in a theater.

Recently, I've run across some articles that are supposed to help you decide on certain important aspects of wireless microphone systems for your application. But unfortunately, there is a lot of poor and even downright wrong information in some of them. This is my list of the "basics" based on years of experience and also from listening to the "pros".

1.) Antenna cables: The fact that cables incur loss is something often overlooked by the less-experienced users but is well understood by seasoned installers. Generally, the thinner the cable, the more the loss. Thus, the length of run you can make with antenna cable is primarily dependant on this loss. Examples: RG174 loses 27dB/100 ft. at 700MHz. Thus, runs of only a foot or two are really practical-perhaps jumpers within a rack. On the other end of the range, Belden's 9913F7 loses only 3dB/100 feet at 700 MHz. Thus, you could very easily use a 100-foot run without any RF amplification.

2.) Antenna type: Here again, less experienced users may see the "shark fin" type antennas and think they look cool, so they must be needed for the next installation. Like any other type of tool, the LPDA (log periodic dipole array) has a specific use because it is a directional antenna. Cardioid microphones are not the right solution for every application, so directional antennas aren't either. If you have a wide area to cover but relatively short distances, dipole or other omni antenna types will probably perform better. However, LPDA antennas are great when you have a narrower angle to cover but a longer distance.

3.) Frequency coordination: Of all the things that will "guarantee a flawless operating wireless system", this one is probably the most important. Not only do you need to leave enough space between your wireless operating frequencies and existing transmissions (like TV or other "fixed" transmissions), but also between your wireless mic channels. Generally, 300 kHz is considered the absolute minimum spacing, but 400 kHz or more spacing is preferred when you can. However, there is also the issue of inter-modulation. When you add several RF transmissions, you end up with new, unintended signals on mathematically-related frequencies. The only real way to avoid having these "phantom" signals cause you problems is to use coordination software to calculate your operating frequencies. Several wireless mic manufacturers offer such software, and there are third-party suppliers as well. Get this kind of software, learn it and use it.

4.) Gain Structure: Just like with any audio system, a wireless microphone needs to be properly set for gain structure. Generally, the standard way to do this is to first set the transmitter by connecting its microphone, guitar cable, or in the case of the handheld-the mic is already connected. Turn the unit on and then sing, speak or play into it at the expected sound level. The goal is to get as much modulation as possible before heavy limiting. In my opinion, a little touch of limiting is actually desirable-that way you know that you are getting the best signal before noise. Next, set your receiver's output to match the intended input. If you are connecting it to a mixing console, ideally you should use the line input connection and set the receiver output accordingly. From there, set your normal gain structure as you would and you should have a nice, clear signal with low noise and no distortion.

5.) Battery management: Generally a good rule of thumb for batteries in wireless mics is to replace them right before the show. Some techs tell me that they like to use the batteries from last night's show for today's sound check, and that makes sense, too. Rechargeable technology has improved dramatically in the past 10 years, but it still takes judicious planning and maintenance to use them properly. Mark the batteries with first use date then discard them after three months of use, even if they seem to be working fine. Rechargeables will lose their capacity after so many charges, and you don't want to be caught in the middle of a show with a dead cell. Even replacing them every quarter, you'll save a ton of money when compared to buying disposables.

6.) System design for the application: I'm sure you've noticed that some wireless systems are designed to be cost effective for a single channel. After all, such systems make up the majority of the volume in wireless sales these days. Churches, bands, and several other types of installations may only need one or two channels, and these systems give the max "bang for the buck". But you may not have thought about the fact that some systems may have been designed with multi-channel operation in mind, and are optimized for the best cost-per-channel when used this way. Some are optimized at two channels, some at four, and some at six. Take the time to figure out which is which-it may make a significant difference in what your budget will allow for in terms of the end result-the number of channels you can have, the performance of the system and how pleased the client will be.

7.) Tried-and-true technology is tried and true for a reason: For certain specialized applications, some of the new digital systems and specialized frequency ranges can perform very well and even out-perform analog wireless systems in the UHF band. However, for complex, multi-channel wireless applications, existing systems from Shure, Lectrosonics, Sennheiser (and others) are what the vast majority of pros are choosing. The simple reason for this is that they work. Broadway theaters, major tours, churches large and small, clubs, theaters, etc. have all come to rely on such systems for day-in and day-out operation. Yes, the spectrum is getting more crowded and the FCC is getting more difficult to predict, but even with all that, these tried-and-true systems continue to work well and are being chosen the vast majority of the time.

8.) Stay on top of the current and upcoming FCC regulations and the changes therein: We're all aware (I hope) of the fact that as of June 12, 2010, no wireless microphones will be legally allowed to operate between 698 and 806 MHz. It doesn't matter if they are digital, analog or quantum-you can't use them in that frequency range. We also now have some restrictions lifted, although perhaps they were considered formalities before. If you have systems in the UHF band and the transmitters have less than 50mW of RF power, you will no longer need a license to operate them. The down side is that now, you also have no priority over any other non-licensed consumer devices, and there are likely to be more of those all the time. Again, it behooves all of us to familiarize ourselves with these and the upcoming, changing regulatory environment for the types of systems we are using. A great place to learn more is right here at SCN.