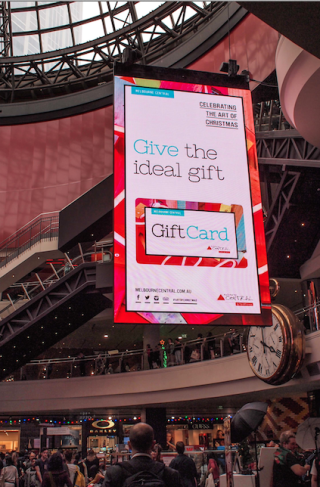 The installation of NanoLumens first visual display retail solution in Australia is the culmination of a close, multi-year collaboration between NanoLumens, its regional sales representative, Digital Place Solutions, and GPT Group Divisional Director John Rankin, who was looking to create an advertising platform that would reach the thousands of people who pass through the tower each and every day.

“Melbourne Central sits at the very heart of the city’s central business district,” explained Gerry Thorley, co-founder and Director of Digital Place Solutions. “The tower is literally a hub for retailers, transportation, and thousands of business professionals who work in the nearby tower offices. The GPT Group sought to create a visual display solution to engage and galvanize the attention of the many thousands of pedestrians who pass through the atrium every day. When we presented GPT Divisional Director John Rankin with the NanoLumens solution, he immediately understood the impact the display would have on pedestrians and, more importantly, on the marketers seeking to reach these pedestrians.”

According to GPT’s John Rankin, this location is precisely what he was looking to turn into a premier advertising medium — something he was able to achieve with the NanoLumens display. “To stand out in an environment like this the display has to be extremely bright and sharp in terms of image resolution. The images themselves have to be presented in a seamless way that doesn’t detract from the marketer’s message. A key ingredient was sourcing a lightweight display solution considering the glass atrium construction and NanoLumens was ideal for this purpose.

“The reliability of the display must also be guaranteed because we cannot afford to have this display be taken out of service, given its central location,” Rankin emphasized. “NanoLumens exceeded all of these requirements. I am very pleased to say that the display has been up and running since the first of December — just in time for the critically important holiday shopping season.” NanoLumens backs up its claims for reliability with a six-year, zero failure warranty.

According to Thorley, the installed NanoSlim double-sided portrait display measures 6.7M (21.9-feet) high X 3.8M (12.5-feet) wide and hangs directly in the center of the tower’s conical shaped atrium. “The location of the display couldn't be better,” Thorley emphasized. “It hangs at the epicenter of Melbourne’s retail, business, and entertainment life and is seen by upwards of 120,000 consumers every day.”

Commenting on the strategic significance of the installation, Almir DeCarvalho, NanoLumens Vice President of International Sales, said, “This is the first in a series of important new retail installations that are now underway in Australia and New Zealand. The region is a major focus of our expansion efforts, both now and over the next several years. Stay tuned to what follows because we have some very exciting projects underway!”