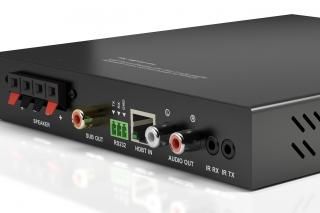 Peerless-AV, in conjunction with WyreStorm, has introduced a new line of HDBaseT-integrated mount kits.

Eliminating the cable clutter of the typical home entertainment system and professional installation project, the Peerless-AV all-in-one-box kits provide HDBaseT integration solutions for both residential and commercial installation projects and enable WyreStorm hardware units to be quickly, neatly and securely mounted to flat panels and projectors for delivery of uncompressed HD video, audio, Internet and RS232 and IR control signals to multiple devices over a single Cat5e/6 cable.

Demand for HDBaseT connectivity is expected to more than quadruple in the global professional AV market alone by 2016, with a 50 percent CAGR between 2011 and 2016, according to a recent report by Futuresource Consulting. As a member of the HDBaseT Alliance, Peerless-AV designed the new line of integrated HDBaseT mounting solutions in an effort to help support and drive adoption of the HDBaseT standard.

Combining WyreStorm’s HDBaseT products with Peerless-AV mounts, the kits include custom bracketry for attaching the WyreStorm modules to the mounts, and security brackets and enclosures all in a single package. Standalone bracketry kits will also be available for installation professionals who want to use Peerless-AV mounts or WyreStorm HDBaseT products that are not included in the pre-bundled packages.

· Articulating (HDB-SAX762PU-EXAMP) and tilt (HDB-STX660-EXAMP) mounting kits for the WyreStorm AMP-001-010 HDBaseT Digital Amplifier/Receiver/Repeater, a first-of-its-kind HDBaseT product with a rich feature set that includes the unique ability to provide amplified stereo audio for powering external speakers and soundbars. The AMP-001-010 can be used for single-source/single-display installations or as a system component in complex commercial jobs.
· Articulating (HDB-SAX762PU-EXED), tilt (HDB-STX660-EXED) and projector (HDB-PRGS-UNV-EXED) mounting kits for the WyreStorm EX-1UTP-IR-100-EDID HDBaseT extender set for residential, commercial and classroom installations requiring HDBaseT connectivity without amplified audio and the other value-added features of the WyreStorm AMP-001-010.
· A projector mounting kit (HDB-PRGS-UNV-EXSW) for the WyreStorm SW0201-HDBT-POH 2 dual input switch HDBaseT extender, a two-input HDMI and VGA switcher that is useful for commercial conference and boardroom applications. The SW0201-HDBT-POH2 converts HDMI or VGA input to an HDBaseT output to enable the transmission of VGA or HDMI sources over distances up to 100m/328ft.

All SKUs include security screws, brackets and/or cages to protect the expensive HDBaseT amp, receiver and projector from theft – particularly in commercial applications where integrators have lacked critical security capabilities for mounting HDBaseT modules.

Both tilt SKUs – packaged with Peerless-AV’s SmartMountXT STX660 Tilt Wall Mount, for example – allow the WyreStorm amp or receiver to be secured to the wall behind the TV in a security enclosure rather than with exposed angle brackets, preventing removal without special tools.

Both articulating SKUs – packaged with Peerless-AV’s SmartMountXT SAX762PU Articulating Wall Arm – offer similar security benefits. They also provide a reliable means of mounting the HDBaseT amplifier or receiver to an articulating arm without zip-ties or fabric fasteners that can fail over time. The integrated design allows the WyreStorm amplifier or receiver unit to be securely mounted to the adapter plate and to sit nearly flush with the TV back, producing a clean side view when displays are pulled away from the wall. The mount’s built-in cable management also hides wires to maintain the aesthetics of the installation.

Both projector SKUs – packaged with Peerless-AV’s PRGS-UNV projector mount – allow one CAT5e/6 cable to run from the presentation table to the projector with a VGA or HDMI input at the transmitter. Both include a security bracket that firmly attaches the HDBaseT receiver to the mount to resist vibration, prevent falling and keep the HDBaseT unit away from projector fan heat that might damage the unit. A security cage for the transmitter is also included to thwart theft at a desk or table.