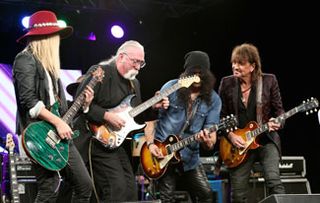 The NAMM Foundation has released the nominees for its 31st Annual NAMM Technical Excellence & Creativity Awards in the categories of Outstanding Technical and Creative Achievement. The awards celebrate the best in professional audio and sound production.

"The story of our industry, and for that matter, the story of NAMM is not some sterile business-school myth," said Joe Lamond, president and CEO of NAMM. "It is the story of passionate individuals who followed their dreams and against all obstacles persevered and succeeded in making the world a more musical place. The TEC Awards and the TEC Hall of Fame honors these pioneers for their vision and service, and we are grateful for their contributions."

An eye toward the future marks this year's technical nominees who have designed products, tools and new software solutions that take music and audio production to the next level. In the category of Audio Apps for Smartphones and Tablets, companies with technology that extends the reach and connectivity of concert sound systems in venues of all sizes are nominated. Those include Allen & Heath's Qu-Pad App, Meyer Sound's Compass Go, JBL Professional's SRX Connect, and other manufacturers' products that break down barriers between studio and live production.

The founders of the Record Plant will be inducted into the NAMM TEC Hall of Fame for their exemplary work in capturing iconic music that stretches across generations of the American musical experience, including Stevie Wonder's "Songs in the Key of Life," The Eagles's "Hotel California," and live recordings captured with the Rolling Stones and Eric Clapton. At the helm of three Record Plant studios were Chris Stone and the late Gary Kellgren. Their New York-based Studio A was the first studio designed for mixing quadraphonic (surround) sound.

Jeff "Skunk" Baxter, whose guitar licks with Steely Dan, the Doobie Brothers, and many more are included on the shelves of music's most successful discographies, will be inducted into the NAMM TEC Hall of Fame for his myriad contributions to music. A sought-after solo and session player, Baxter's career fluidly moves between a mixture of genres from pop to country to rock, fusion and beyond.

In total, winners in more than 30 categories will be selected from the 180 nominees. Winners will be selected by voters from major pro audio publications including Mix, Pro Sound News, Pro Audio Review, Sound & Video Contractor, and Electronic Musician magazines, as well as members of the Producers & Engineers Wing of the Recording Academy, Game Audio Network Guild and select NAMM members.

The January 23 event begins with a reception at 6 p.m., followed by the awards ceremony at 7 p.m.