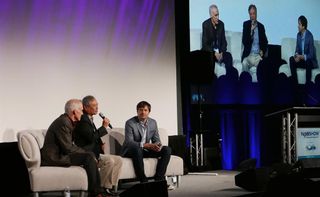 Ang Lee (center) discussed on Saturday at NAB, his vision for cinema and the creative opportunities for the future of filmmaking with Billy Lynn’s Long Halftime Walk editor Tim Squyres (on left) and production systems supervisor Ben Gervais (on right).

For the best, brightest, most high contrast digital image on a screen, in 2016 the buzz is all about HDR. High Dynamic Range. It’s big news, it’s important.And it’s coming on strong. But isn’t the term HDR suspiciously similar to HFR for many theater owners and many moviegoers– yet another H-bomb that will probably morph again two years from now? Don't be caught yawning with the masses who might think HDR is another stretch by Hollywood to instigate another content platform change, in its ongoing attempt to get the magic back into the theatrical experience. Anyone who thinks that HDR is not something more important than anything that’s come along in the projection/display world the past 15 years– maybe even a game-changer– is not paying attention. Not just to what Hollywood is up to in the commercial movie theater space but what Hollywood and the giant display/TV manufacturers are up to for the home entertainment market (and even the commercial AV market). In fact, the two realms– big screen cinema and the flat panel display/TV worlds– are quickly nearing the same intersection, and the lights on both corners are green and staying green.

If it’s HDR, more HFR (High Frame Rate), the latest 3D developments, and more of everything big-screen on all the on-ramp signs, you could only be headed to the big Future of Cinema Conference organized by SMPTE and NAB and held each year (it was formerly called the Cinema Summit) in Las Vegas the weekend just before the opening of the show floor at NAB. It just wrapped, and it did not disappoint.

But to understand the ongoing evolution of cinema and large-venue projection, you have to keep all the players straight– and the plot is complicated. In the last episode: Last year’s conference saw the culmination of a two-three year plot twist that featured a variety of Hollywood villains and heroes flogging or praising HFR (High Frame Rate: shooting and projecting at more than the historical 24fps rate for film or video). After the Hollywood studios were very successful in using 3D to create even more interest in tent-pole releases (Avatar, Lord of the Rings, and others) attention turned in 2012 to HFR to differentiate the movie theater experience from the couch and protect box office sales. Some HFR controversy started with Peter Jackson’s shooting and Warner’s release of the first Hobbit movie in HFR. Hard to remember the reason for all the hand-wringing, but some consumers complained about the TV-like look of HFR. But remember that after the release of the second Hobbit installment in the Hobbit franchise in December 2013, also in HFR, there was virtually no controversy or even comment from pundits or public. HFR had become yesterday’s news. The Cinema Summit 2015 saw attention turning away from HFR and toward one of Cinema’s biggest problems: dim, lackluster 3D imagery in commercial movie theaters that translates to a mediocre movie experience that translates to mediocre ticket sales. Enter, last year, laser projection– with laser’s huge lumen boost. At the Cinema Summit 2015 new generation laser projection was no longer an intriguing option but out there with real product (in various iterations/combinations from Christie, Barco, NEC, Dolby, and IMAX). An interesting sidebar of that laser-focused race– most visibly the 2-projector Laser (Christie) vs. the single projector laser (Barco) race– was that Dolby stood out by saying that HDR was as important if not more important than just the more raw lumens delivered by laser. Dolby, operating on the idea that delivering HDR (High Dynamic Range) to the home would be easier than doing 4K, demo’d HDR offerings at NAB last year– their Dolby Vision system. It raised eyebrows, and has continued to do so into 2016.

So what was the buzz at the Future of Cinema Conference that just wrapped in Vegas? HDR? Yes. Big time. But this year, the biggest buzz did not come from the big projector manufacturers slugging it out with demos and Powerpoints on the specs of their big guns. It came from film pros in the trenches, explaining how HDR was a game changer. And the biggest buzz of all came from stunning demo of actual and spectacular HDR/HFR footage from a major Hollywood movie slated for fall 2016 release– from none other than Ang Lee, and (hold your judgment please) HFR on steroids.

Starting off the HDR buzz at the conference was the Saturday morning session, “First Forays: High Dynamic Range in Live Action and Visual Effects”. The session, moderated by Pat Griffis of Dolby Laboratories and including Rick Sayre of Pixar Animation Studios, Jeroen Schulte from Industrial Light and Magic, Thad Beier of Dolby, Ben Rosenblatt of Bad Robot, Stephen Nakamura of Deluxe's Company 3, and visual effects supervisor and 2nd unit cameraman Rob Legato, explored how high dynamic range made its maiden voyage into theaters with the release of Tomorrowland (May 2015), and enthusiasm around the format has only grown in the year since. And with the release of Star Wars– The Force Awakens and other titles, HDR has been born into the visual effects and live action production pipelines.

All of the panelists waxed eloquent about the benefits of HDR– with its improved contrast and deeper black levels– and how they are all trying to create a workflow, from capture through post, that creates a stable base for the DCI master�� “to pay the bills” according to Dolby’s Griffis– but that leaves room for HDR “after the fact” i.e. for an HDR master when the new server/projection platforms are in place.

Ang Lee at the NAB Future of Cinema Conference
What does the consumer TV world have to do with HDR? Everything. All you have to do is rewind this year back to the CES show just a few months ago, when all the TV giants showed improved HDR consumer flat panel TV’s, and also products and content surrounding the new 4K Ultra HD Blu-ray format with a resolution of 3840 x 2160 and support for wider color gamuts and High Dynamic Range.

And the biggest shot across the bow of HDR came, at that same January 2016 CES show, from LG with their OLED TVs, that feature contrast ratio and HDR beyond any display or screen you’ve ever seen. And an exclamation point was put on the LG product when– also at the Las Vegas Convention Center, different show just a few months later, LG Electronics USA Business Solutions announced on the first day of the Digital Signage Expo in March, that digital signage displays based on OLED technology would also be available to businesses seeking display solutions– i.e. for the commercial AV and digital signage market. In years of covering both cinema technology, and the commercial AV “digital signage” market, this is the first year that I’ve drawn such a direct line between the two worlds. The bottom line for anyone reading this from the commercial AV or cinema world: we’ve seen for years how the consumer electronics market more often than not takes the lead in the introduction of next-gen display technology. Some years, the dynamic is not so strong. But normally, whether the catalyst comes from the consumer or the pro/cinema side both sides eventually adopt the new-gen technology. But not always. For example, 3D never took off in the home TV market despite the push by Hollywood for 3D in the commercial theater. So while there can be twists and turns, there are years and multi-year runs when the trend is so strong that it’s impossible to ignore. That’s what’s happening now with HDR. OLED is the culmination of HDR in the flat panel world, but whether OLED from LG and eventually others ends up being the new standard for improved NITS, contrast range, black levels and color gamut in the flat panel/TV world, in fact all the display manufacturers are putting their best efforts into that race. And several companies– with Dolby at the head of that small group– are attempting with serious offerings to do the difficult, marry commercial cinema technology to the home entertainment experience, that is try to get consumers to demand the technology they see at the next Star Wars or Avatar premier at the big movie theater, in their living room, while ensuring that they don’t just plant themselves on that living room couch and stop going to the movie theater period. It’s a delicate balance and a hugely difficult task, and one that’s frustrated companies as formidable as Sony and Texas Instruments. Dolby may be more successful, with Christie as its projection partner on the cinema side. And don’t forget the Barco alliance with IMAX. Not just IMAX but the premium or “luxury” cinema market is both on a roll and pointing toward the biggest business trend for Hollywood: the premium movie experience that involves some combination of huge screen, wraparound screen, HDR, HFR, 3D, and non-technology but hugely growing elements such as in-theater dining and bar services.

But back to the trenches of Hollywood pros, and what they brought to the Future of Cinema Conference to share– in their quest for great new tools to improve the movies. Previous Summits have featured megastar directors such as James Cameron and Peter Jackson addressing (more commonly not live but remotely via video conference or taped messages) the Cinema Summit on the trials, tribulations, and joys of big-budget, cutting edge movie production. With directors of that caliber and the kind of productions they’re involved in, it’s usually a tech love-fest. On Saturday, director Ang Lee addressed the conference, and brought a refreshingly different message, but one no less inspiring for the tech community. I haven’t been to a session at any conference over the years that made a better case for pushing the limits of technology to pursue an art form. Saturday’s session “Ang Lee– Pushing the Limits of Cinema– Billy Lynn’s Long Halftime Walk” was a revelation. "Billy Lynn's Long Halftime Walk" from Sony Pictures, the first major motion picture release captured in 120 frames-per-second 3D at 4K resolution and in High Dynamic Range, and scheduled for a fall 2016 release, is the reason for all the excitement.