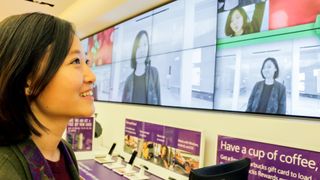 Customers interacting with the Photo Booth installation using the Kinect for Windows
The Photo Booth installation guided users through a simple process of capturing their image, using the new Kinect for Windows, and choosing from predefined image filters to create a personalized collage. The application used the images to generate a 26k video wall theme on-demand, instantly deploying it to the store’s video wall.

“Microsoft Stores and Synect collaborated to create a truly magical experience,” said Peter Ruthenberg, Senior Art Director for the Microsoft Retail Stores. “The campaign for the Microsoft Store during the holiday season was called ‘Give Happy’ –and Photo Booth kept the video walls full of happy families and smiling faces all through the season.”

The Photo Booth installation marks the first time Microsoft has enabled users to interact with their video walls in such a direct manner. It also shows new ways dynamic, user-generated content can be incorporated into a multi display installation.

“The best part about it is that it looks really simple, even though the complexity behind the scenes is huge,” said Synect’s Director of IT Assaf Margalit. “We’re using a lot of innovation—from Microsoft, Synect, and our partners—to reimagine digital experience inside the store.”

Photo Booth was built by Microsoft and Synect to integrate with the store’s digital signage network. Driven by YCD Multimedia’s digital signage system, the network powers over 70 store video walls, which can have a resolution up to 57,600 x 1080.

The installation included a Kinect for Windows V2 sensor, a Surface Pro 3, and a Lenovo All in One at a photo station designed and fabricated by Gensler. Plugins and custom development by Synect enabled interactivity with the video wall and allowed the experience to span across multiple devices.