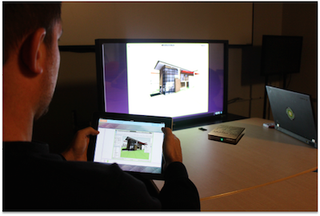 Price point, turnkey, and high performance are the points Mersive is driving home with the introduction of Solstice Pod, a wireless media streaming solution to further improve the collaboration experience in conference spaces and classrooms.

Mersive's Solstice Pod is paired with an Android-based, WAP-enabled hardware platform that integrators can simply drop into a room.

The flexible Solstice software is being paired with an Android-based, WAP-enabled hardware platform that integrators can simply drop into a room, no Windows-based PC necessary—as was previously required with the standalone software offering—and no need to connect to a broader network.

“Being in a position to launch the Solstice Pod on an Android platform is a big step forward for us because our customers, our channel partners, are finally going to have their cake and eat it,” said Rob Balgley, CEO, Mersive.

“You don’t need to be on the corporate network,” Balgley continued. “It really is just a big step forward for us. Having an appliance, coming in at these prices, and having the option of either a standalone drop-in, for sort of a rogue deployment, or putting it on the network.”

The Solstice Pod is offered in a Small Group Edition (SGE) for $799 and the Unlimited version rings in at $999. With this launch, Mersive has also revised pricing for the Solstice software to reflect use case requirements and bring it in line with the Solstice Pod.

The choice of an Android box offers a powerful platform at this highly competitive price. Not being a firmware-based hardware solution continues to highlight the strength of the Solstice software, offering a continuous upgrade path. New capabilities that the Solstice Pod enables include synchronous desktop audio streaming, remote configuration via a web browser, single-click software updates, built in WAP, and native support for touch and 4K displays.

Ultimately, the driving force behind Solstice Pod was to remove some of the barriers for broad scale adoption in any space. Balgley further enforced Mersive’s role as a software provider first, despite the introduction of a hardware component.

“I’ve had a lot of people ask me, ‘Well, does this mean you are going to start to move away from development on the Windows platform?’ Absolutely not,” Balgley stated, noting that the difference in code base between Windows and Android is “practically nil. We don’t have a team working in Android and a team working in Windows. As we continue to bring out new features, it will be easy to update both platforms at the same time.”

With this introduction, the Solstice platform moves further to support specific rooms of all sizes and their individual purposes within the corporate and education markets. “Meeting culture has changed so much that the need to support all these different use cases makes it quite a challenge,” he said. “What you’ll find with the Pod, with the Solstice product, is it continues to support that very heterogeneous use case because everyone has meetings differently.”

Feedback from AV channel partners and end users was a critical component in the product development. “I think the Pod product is almost an homage to the AV channel by saying, ‘Here’s something that’s even easier for you to sell,” Balgley said. “It’s a hardware-based product, but with all the virtues of software. If you want to sell it as a standalone, and you don’t want to have to put it on the network, Here you go. Have at it.’”

The Solstice Pod will begin shipping in April 2015.