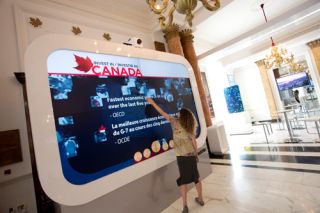 “Canada is an important player in the global economy,” noted Kathryn Cress, vice president of Global and Corporate Marketing at Christie. “As a major contributor to Canada’s technology revolution with manufacturing facilities in the Waterloo Region, Christie is proud to bring its expertise to Canada Olympic House to help further the country’s strategic expansion upon the world’s digital stage.”

According to the government of Canada, Canada’s digital industries are a rapidly advancing sector, with 32,700 companies, more than half a million employees, annual revenues in excess of $162 billion and annual exports of $26 billion in 2010. Profiling these activities is part of the government’s economic strategy to create conditions for businesses in Canada to succeed on a global scale. At Canada Olympic House, senior policy-makers and global business leaders will inform potential investors about Canada’s ICT sector, its key areas of growth, as well as the challenges and emerging investment opportunities.