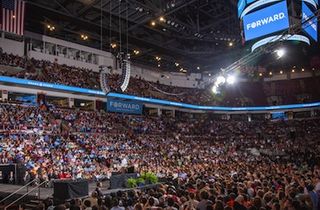 “QSC’s local rep called us as soon as he heard we were in the market for new inventory, and he did a good job of focusing us on what would work best for our needs,” said Tony Ferrello, president, Forty Two Inc. In total, Ferrello purchased 32 WideLine-10 line array modules and twelve WL218-sw subwoofers, eight KLA12 active line array modules with four KLA181 subwoofers, and ten K12 active loudspeakers. “We have used WideLine speakers quite often for several years through a partner vendor of ours, and we've been using QSC amps since we've been in business, so it wasn't a hard decision.”

The longevity and roadworthiness of the QSC Loudspeaker Systems were critical factors in Ferrello’s purchase decision. “Ninety percent of what we do is rental and staging and only 10 percent are ancillary things like sales and service, so we need a company that is building products that are made to last on the road, not just hung somewhere and left,” he said.

Cost-efficiency and quality were also a major factor. Ferrello elaborates, “We don't make as much money here per unit sale as is the case in other areas of the country. So if we have a quality product from QSC that we use for five or more years then we're going to make our ROI and keep a consistent quality. Those are the two things in our market that are really important.”
Ferrello added, “QSC has better factory support than the previous company we used in terms of rental and staging. That other company was only helpful when we were selling a system to somebody.”

The fact that a WideLine-10 module is so compact, weighing just 83 pounds (38 kg), was another consideration, since the system doesn’t require a tractor-trailer for transport. “You can put the WideLine in a straight truck,” said Ferrello. “With the changing economics of business and the cost of transportation, our clients might say, ‘We can carry 24 WideLine, our entire audio rig with in-ear monitors, in a straight truck, maybe even with the backline — we'll save thousands of dollars on a six-month tour.’”

Forty Two Inc., a GSA [General Services Administration] and CCR [Central Contractor Registration] contractor, does a lot of government work, and that carries into the political world every four years.

“That's a big boost for us, to work with one of the candidates, typically the incumbent,” said Ferrello. “'Obama for America' is one of our big clients. We bought the QSC system right at the beginning of this election cycle, and in May at Ohio State University’s Schottenstein Center, a 20,000-seat arena, we used 56 WideLine-10s, 12 WideLine-8s and seven or eight racks of PowerLight 380 amplifiers. That event was really successful.”

“We started with President Obama when he was a senator. The first event we did with him, at Penn State University back in early 2008, was with a sub-rented WideLine system. We've done probably 30 or 40 large events for the president over this summer with WideLine in the northeastern U.S. So the whole time we've been working with him we've been using WideLine.”

Working as a government-approved contractor, every dollar that the vendor charges is under scrutiny, he says. In the case of GSA work, the agency schedules the payment based on national averages. Those factors, too, encouraged Ferrello to look for a cost effective PA solution, which he found in the QSC speakers. “That has focused our business on getting the job done with less transportation and labor costs,” he said.

But it hasn’t been just political events for the new QSC speakers. "We had the WideLine for Bruce Springsteen in Cleveland, OH, which was a show for 10,000 people at a college. We've done some shows for ABC’s ‘Good Morning America.’ And we used WideLine on the Fourth of July for firework music at different locations,” he reported.