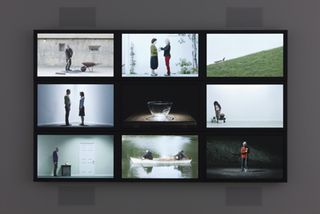 “The Dreamers” is presented on seven 65-inch plasmas in a gallery on the lower ground floor. This video shows underwater portraits of people who appear to be sleeping; in its spiritual, immersive subterranean environment, ultimate interpretation is left for viewers to define through their own experiences, notes the gallery. Associates in Media Engineering (AME), a consortium of consultants and a boutique provider of custom solutions for the special venue marketplace, spec'ed the gear and oversaw the installation.

“Bill’s videos had to loop seamlessly for both picture and sound,” says Lein. “We had confidence that Alcorn McBride’s products would be able to achieve the artist’s vision – and the show was no easy task for MPEG.”

He explains that Viola’s work “uses a ‘grainfield’ effect, which makes it difficult to compress – and it has to match seamlessly from last frame to first frame- that point where you would really see the hit.”