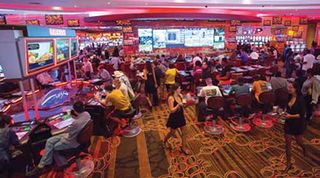 Gambling is a numbers game, and the numbers at Maryland Live! Casino definitely boost the house odds.

More than 100 LG displays appear to leap off a fragmented in-wall video wall display and scatter throughout the ceiling across a wide space in the R Bar at Maryland Live! Casino.Across the 160,000-square-foot casino floor and beyond into dining and entertainment venues, developers The Cordish Companies show their cards with 665 video displays and 80 sources distributed as digital cable TV channels. And that’s just the foundation of a system that seems to grow with each pull of a one-armed bandit.

The Cordish Companies has developed a reputation for being proponents of video technology across its various properties nationwide, so AV systems design consultant Shannon Jelenek had an inclination that “video was going to be a very strong component to this build.” Fortunately, having recently completed work on some smaller casinos, he knew one thing for certain: “A traditional point-to-point router for a property this size and possible expansion would limit the overall system.”

As such, goals for the AV design were to provide the client with all the flair they needed for opening, while simultaneously preparing for what they wanted down the road “without major expansion expenses and re-work,” Jelenek said.

Providing the seemingly unending ability to continuously add displays is a RF-based distribution system designed in a star configuration from two amplification points to cover the building.

This approach was especially beneficial, as some of the LCDs would be dedicated to visual content related to specific games on the floor, while others displayed digital signage and entertainment content. “With an RF cable system it is easy and inexpensive to expand the number of outputs (just add TVs) and sources (just add channel modulators),” observed Scott Hetzler, president and chief engineer for Contemporary Research, who did a number of site visits himself to ensure the success of the project. “Any TV can be tuned to any channel and thus watch any source—signage content from a media player or from a live satellite/ cable channel). Control is over the same RF cable system and so there are no other wires to run.”

In addition to displays mounted via Chief Manufacturing products throughout the complex, there are also a variety of video wall configurations, most notably in the R Bar, where more than 100 LG displays appear to leap off a fragmented in-wall display and scatter throughout the ceiling across a wide space. AMX control allows an easy shift between digital signage and entertainment or sports feeds on the exploded array.

On the audio side, Martin Audio ceiling speakers were used throughout, with distribution and processing handled by BSS Soundweb London via BLU Link to Crown amplifiers. “This saved in a bunch of DSP as well as wiring and having to manage extremely complex switching matrixes,” Jelenek noted.

Not to be overlooked is the top-notch concert venue built into the mix. Ram’s Head Live features a Martin Audio Blackline system, Digidesign SC48 console, Mitsubishi FD630U projector, and a full kit of microphones from Lectrosonics, Shure, AKG, beyerdynamic, and Sennheiser.