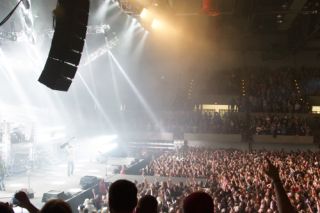 LYON loudspeaker at Brantley Gilbert concert
LYON incorporates the technology of the LEO Family in a more flexible and compact package, and extends the advantages of highly linear self-powered systems to a larger range of venues and applications.

The tour also carries 24 MICA and 12 MINA line array loudspeakers for out fill and front fill, respectively. Six 1100-LFC low-frequency control elements in cardioid or end-fired configuration provide low end, while a Galileo® Callisto™ loudspeaker management system with two Galileo Callisto 616 array processors and a Galileo 616 processor handles drive and optimization.
With only six 1100-LFC loudspeakers up front, the audio team has been asked if the tour has enough subwoofers. “I just say, ‘Wait until you hear them,’ and that settles it,” says Wacker. “The 1100’s have an amazingly high output, and supply more than enough low end for the venue sizes we’re playing.”

“LYON is extremely smooth and linear, and has power for days,” says Andy Wacker, FOH engineer for Brantley Gilbert. “It just keeps on going. It’s also easy to work with—there’s no need to manipulate the sound, to pull tricks from up your sleeve. It’s all straightforward, so I can concentrate on my mix.”