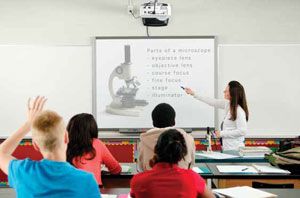 Interactive display systems have become commonplace in the classroom, with interactive projection systems, although introduced relatively recently, already being embraced especially by K-12 schools. As manufacturers begin to roll out the ability to not only annotate the displayed image but also control these systems via wireless devices, the stage is now being set for a new level of collaboration in the classroom.

“Interactive projectors are only a year and a half, two years old, so [educators are] still getting their hands around it,” commented Mitch Rauch, associate vice president of pro AV and education at BenQ America. “They’re still feeling their way around templates and lesson plans and trying to incorporate their previous work into the new technology; there’s a learning curve.”

That said, “I think the adoption in K-12 is much quicker than in higher education,” he added.

Of the current technologies, flat panel displays appear to be the least likely to be installed in the classroom. “They seem to be a lot more expensive, especially if you want the interactivity,” observed John Glad, product manager at Hitachi.

There’s also the issue of available real estate. “With an interactive projector you can use the wall or an existing board. If you use an interactive projector on an existing white board when you just want to write, you’re not losing space,” said Glad. “If you put a flat panel in there, you have to mount it somewhere. If you put another flat panel or another white board up, you lose space.”

A flat panel also needs to be large enough for students at the rear of the classroom, and that can be expensive. “The cost structure from one technology to the other and the screen sizes required for students to be able to see from a distance still lends to the projector side,” said Rich McPherson, senior product manager of projectors at NEC.

Those factors are certainly helping to drive interactive projector sales. But another factor, the sharper projection angle, is also pushing buyers toward ultra short throw projectors.

The proliferation of the iPad and other wireless tablets has allowed teachers to step away from the board, preventing shadows.

With a standard throw projector the teacher can easily cast a shadow on the screen, explained McPherson. “The user has to be extremely aware that when they’re writing they can’t create an area where the shadow will overtake the tip of the pen, because then the system won’t know where the pen is; it relies on that feedback.”

One way to completely eliminate shadows is to work wirelessly. The proliferation of the iPad and other wireless tablets—some higher education establishments even give them to students who enroll—has allowed teachers to step away from the board.

“Through 2015, in the data that we’ve seen, the iPad is the dominant tablet in the market, whether it’s business or K-12. It behooves us to create software that’s going to work on the market leader first,” said Glad.

Hitachi also offers a tablet that connects wirelessly with its short throw, ultra short throw, and standard throw projectors, without the need for a computer, said Glad. “You use no software, just this wireless tablet.”

“You can use any of the Android devices with our boards, or you can use the iPad,” said Michelle Connolly, national sales manager for the education team at Panasonic. “And we have a new Toughpad coming out in May. It’s durable, military grade; you can spray water on it.”

According to McPherson, “We’ve created software that allows us to place an app on an iPad, software that sits on the computer, whether PC or Mac, and use the iPad to do all the annotation and control of the computer.”

Working wirelessly offers other benefits, too. The teacher can face the room, and can also put the device into a student’s hands, allowing them to annotate from their desk.

“Just as important,” noted McPherson, “is the fact that it doesn’t rely on [schools] having to purchase a short or ultra short throw projector. You can use any standard projector, because you’re never blocking the interactive system—it’s at your fingertips.”

Tablet use also eliminates a very real issue associated with white boards in the classroom, where younger and smaller students are unable to reach the top of the equipment, McPherson also noted. “With an iPad you can annotate any point on the image.”

For Panasonic, interactivity means more than just collaboration between teachers and students. Because the company makes such a variety of products, many of them can be interconnected. For example, said Connolly, “Our boards can be connected via USB to our audio systems.”

The BenQMX711 displays content from internet enabled computers without effort from the instructors.

Some Panasonic boards even feature integrated loudspeakers. “With a projector you still need a sound system,” noted Connolly. That typically means extra wiring and added options. “But ours are embedded in the board and are also served from the projector.”

Rauch believes that projectors in the SMART and Promethean lesson plan environments are about due for replacement. “They’re getting ready to cycle through a couple hundred thousand projectors that are coming of age. I think a lot of [educators] are starting to look to interactive projectors to complement the software that’s in those embedded boards.”

Buying inexpensive projectors can be a false economy, agreed Connolly. “A year or two down the road those projectors might have filters that go within 1,000 hours. Most of our projectors are 12,000 hours, because of our rotating filter. Our lamps are over 6,000 hours.”

BenQ has recently introduced two laser projectors. “In average school usage that’s eight to 10 years on the light source,” said Rauch. “Schools no longer have to replace the bulbs five times [in a product’s lifetime].”

The new projectors offer additional ecological benefits. According to Rauch, “A projector puts out about 140-degree temperature, which affects the cooling costs in a classroom. With a laser it’s only about 70 degrees.” Lasers are—literally—cool.

The projectiondesign F21 single-chip DLP projector comes with full HD native 1080p resolution. It incorporates a high quality zoom lens and a long life lamp. The projector uses projectiondesign’s RealColor color management suite, appropriate for stand-alone or multi-channel blended environments. For greater accuracy, RealColor allows the user to define a desired white point, match the colors from the projector to the picture on the screen or a print.

The LX60ST and LW61ST education projectors offer an average of 20,000 hours of brightness and 80,000:1 contrast ratio. The units feature instant on/off to save time on warm up and cool down, in addition to manual brightness level adjustment to accommodate different classroom environments. To generate the best image contrast, the projectors’ SmartEco advanced mode automatically determines the optimal brightness level based on the input source, while a “no source detected” mode automatically lowers brightness to 10 percent when no display has been detected for more than three minutes. With eco blank mode, teachers can blank out the LX60ST and LW61ST’s screens when not in use to redirect students’ focus while lowering light source power consumption to 10 percent.

The Panasonic PT-TW231R series short throw LCD projectors come with WXGA resolution and 2,500 lumens of brightness. The series, which includes the PT-TW231RU and PT-TW230U, is appropriate for the education market and have been designed with a short focal lens that allows the device to project an 80-inch diagonal image from approximately 33-inches away from the display surface. A long lamp life and a durable multi-layered filter both have a replacement cycle of up to 4,000 hours. The PT-TW231RU built-in interactive features enable users to project onto surfaces and interact without a specialized board. The projector comes with an interactive pen and interactive pointer that sends written information back to the projector camera module so users can write text, graphics, or lines on the projected images.

ViewSonic’s PJD6 series projectors are equipped with Crestron RoomView network management software that enables centralized control for up to 250 projectors. The projectors are also AMX certified. With ViewSonic’s Smart ECO technology, PJD6 series users can present their content with the appropriate lighting to capture audience focus by dimming an image as needed while enjoying an automatic energy savings. Furthermore, the PJD6 Series’ ECO mode delivers a lamp life of up to 6,000 hours for greater energy and cost savings, along with noise reduction. When it comes to lamp maintenance, the series’ top slide door design makes the task easier than ever.

Mitsubishi’s wide-screen format WD385U-EST and XGAresolution XD365U-EST 3D-ready projectors support single or dual pen functionality when used with interactive teaching software. Students and teachers can make annotations on almost any solid surface. The dual pen functionality enables two pens to be used independently at the same time. Like its other extreme shortthrow projectors, Mitsubishi’s WD385U-EST and XD365U-EST projectors are built with a specially crafted lens that provides short-throw focus performance and can project a 70-inch (diagonal) image from less than 23-inches away.

The Hitachi CP-D31N can project an 80-inch image at a 32-inch short throw distance, making it appropriate for education, business and commercial applications where space is limited yet where large, clear, and bright images are required. The CP-D31N offers network connectivity via an RJ-45 ethernet jack for connection to a local area network (LAN), allowing content to be sent directly from a computer to the projector via the network, as well as facilitating monitoring and maintenance via the LAN. Hitachi’s PJMessenger function allows text messages and audio alerts to be sent on all networked projectors, an effective way to send announcements throughout an entire campus or facility.