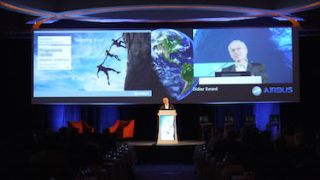 “We used to set up our events utilizing several Analog Way devices simultaneously: Di-VentiX II, Pulse and Orchestra; but control room started to become too complex, especially in terms of cabling,” said Laurent Puget, founder of LCD Vision. “Thanks to the Ascender 48 we were able to easily achieve a demanding setup. In addition, the great variety of input plugs gives it a significant advantage compared to its competitors as it enables us to respond to any needs, especially when there are last minute changes.”

For this event, LCD Vision employed a soft-edge blending projection on a 12x3.4m wall fed by two projectors on trusses. The dynamic display featured four layers and one animated background for videos, PowerPoint presentations and camera feeds. The four outputs of the Ascender 48 were also used: two for the soft-edge blending projection, one for the three monitors on stage and another one for the digital record.

Puget went on to describe the deployment of the Ascender 48 during the congress. “We set up and configured the device through the Web RCS and created approximately 12 master presets. For the live control, we used the AW ToolBox app on our iPad for the first time. I had some apprehensions in using an app to control everything, but during the exploitation it proved to be very reassuring and easy to use. For instance, the ability to name master presets drastically simplified the live control.”