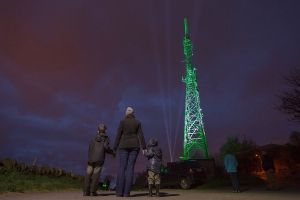 Bystanders look on as the tower lights up the night sky.
Lighting equipment was supplied by Blackburn based HSL. The project was commissioned to help local roofing company Ploughcroft celebrate achievements in energy saving for numerous homes, schools and businesses across Yorkshire.

The tower, owned by Arquiva, is a broadcast and communication facility receiving TV and radio transmission signals from Emley Moor Tower and beaming these to areas in the north, east and center of the town of Halifax which are blocked by the hill on which the tower resides. It also accommodates 3G and 4G cellular generators for several mobile networks.

The lighting project follows on from James’ lighting of the Emley Moor Tower last year.

HSL MD Simon Stuart commented, “We were delighted to work on this very cool project with James. There was a really nice connection and continuity between this and the acclaimed Emley Moor project last year, and we were all impressed to see what he was able to achieve with careful placement of a few well focussed powerful light sources”.

Once commissioned for the project, James created a concept and turned to HSL for his lighting requirements. He wanted a strong eco-angle on the lighting – as they were celebrating power saving – and so chose primarily LED fixtures with SGM G-Spots and P-5 floods.

“I needed powerful IP65 rated units as the weather was likely to be at best unpredictable,” explained James, “and these ticked all the boxes”.

They were able to get access right at the base of the tower to position equipment, so one G-Spot was installed directly underneath the tower in the centre shooting its beam right up to the top. As it pierced the metal cross-bracing, the reflections bounced and refracted creating attractive aberrations of the light.

Three sides of the tower were clearly visible from the various viewing areas in the city, so each of these was up-lit with a single G-Spot. These were programmed with gobo sequences to add texturing and effects on its metalwork construction and the subtle but highly effective results made the cross bracing supports look like they were actually moving.

For an overall wash, four P-5 LED floods, fitted with 15 degree lenses so the output could be focused right up to the top of the tower, were also located around the base. A further six P5 units with 21 degree lenses were utilized to light the bottom two thirds of the tower, ensuring a good, even saturated light.

All the fixtures were individually controlled via an Avolites Tiger Touch II console and were mixed into a series of stunning looks. A signature look of green hues mimicked Ploughcroft’s corporate ID and formed the main look, with other colour and gobo combinations run at specific intervals throughout the evening to add interest.

“I was amazed how much you can achieve with four G-Spots and 10 x P-5s,” commented James, adding that it was all about strategic and calculated positioning. He was very impressed with the brightness and focusability of both types of fixtures.